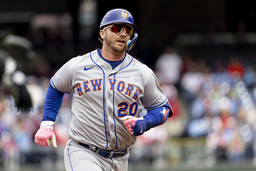 PHILADELPHIA (AP) Pete Alonso homered twice, had three hits and drove in five runs to lead the New York Mets to a 6-1 victory over the Philadelphia Phillies in the second game for a doubleheader split Sunday.

Chris Bassitt (4-2) allowed one run in 5 ? innings to help the NL East-leading Mets. Jean Segura homered for the Phillies.

In the opener, Bryce Harper homered again off Max Scherzer and the Phillies became the first team to beat the new Mets ace, snapping a four-game skid by topping New York 3-2.

Alonso almost single-handedly lifted the Mets in the nightcap, driving a changeup from Cristopher Sanchez (0-1) deep to left for a two-run homer in the first. He hit it even farther to left in the fifth off Nick Nelson, a three-run shot that put New York up 5-1.

"It felt good," Alonso said of his second homer. "Just wanted to do what I could to put a good swing on a pitch in the zone."

Alonso was 0 for 3 with a pair of strikeouts in the first game before helping the Mets avoid just their second losing streak of the season.

"We've played such great team baseball," he said. "Everyone has answered the bell."

Harper, using a pink bat for Mother's Day, drove a 94 mph fastball from Scherzer (4-1) over the wall in right for a solo homer with two outs in the first. He screamed, "I love you, Mom!" into a TV camera before returning to the dugout.

"I thought we played well the first game and the second game got away from us," Harper said.

Harper added an RBI single in the third. The reigning NL MVP also homered off Scherzer, his former Washington teammate, on May 1.

Kyle Schwarber, Alec Bohm and Segura each had a pair of hits for the Phillies, who bounced back from Thursday's 8-7 loss to the Mets in which New York rallied for seven runs in the ninth inning.

"I think we needed that," Phillies starter Kyle Gibson said. "For the offense to come out and do what they did against Max was big."

The single-admission doubleheader was part of a makeup after games between the teams were rained out Friday and Saturday.

Scherzer suffered his first loss since last May 30, ending a string of 24 straight starts without a defeat. The streak spanned his starts with the Nationals, Dodgers and Mets.

"Heck of a run," Scherzer said. "Obviously it takes your teammates to be able to do that. I'll always say that. It's also kind of cool to be a part of it."

The three-time Cy Young winner signed a three-year, $130 million free-agent deal with the Mets in the offseason. The Phillies recorded 10 hits against the right-hander, marking just the 14th time in 413 career games Scherzer has allowed double-digit hits. Nine of the hits were singles.

"I know I made a mistake to (Harper), but I was executing pitches," Scherzer said. "It's part of baseball for them to get some singles to (fall) in, but I feel like they were getting a lot of singles to fall in. But that's just part of the game. It's tough to beat yourself up over that."

Scherzer gave up three runs in six innings, striking out seven and walking none. He remained 18th all-time in strikeouts with 3,069 career K's.

Gibson (3-1) gave up two runs on six hits with three strikeouts and no walks.

"You've got to capitalize on the opportunities (Scherzer) gives you and we did a good job of that," Gibson said. "It was a great team win."

Corey Knebel, after blowing the save on Thursday, pitched a 1-2-3 ninth for his fifth save.

Bryson Stott's RBI single in the fourth put the Phillies in front 3-0.

The Mets released 2B Robinson Cano prior to the game. The move comes a week after the slumping Cano was designated for assignment despite nearly $45 million remaining on his contract. The Mets announced the news in their pregame notes and after manager Buck Showalter met with reporters.

Mets: After an off day, the Mets open a three-game series at Washington on Tuesday. LHP Patrick Corbin (0-5, 7.16) is scheduled to start for the Nationals. The Mets haven't announced their starter.