Jays lose finale to Orioles 7-5, will face Rays in playoffs 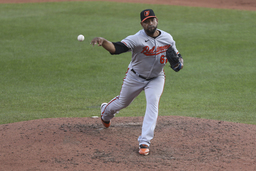 BUFFALO, N.Y. (AP) The Toronto Blue Jays are set to face the Tampa Bay Rays in the first round of the postseason after losing to the Baltimore Orioles 7-5 on Sunday in their regular season finale.

The Orioles denied Toronto (32-28) a chance to finish second in the AL East and instead relegated the Blue Jays to the eighth and final seed in the AL playoffs. Toronto will open a three-game series in Tampa Bay on Tuesday.

All in all, it's a vast improvement on 2019, when the Blue Jays finished a distant fourth at 67-95. They were 4-6 against Tampa Bay this season.

The final day loss snapped Toronto's four-game winning streak. The Blue Jays won six of eight to finish the regular season. Outfielder Lourdes Gurriel Jr., who had four hits Sunday, said the Blue Jays are feeling good about themselves as they head for Florida.

"Our confidence right now is great," Gurriel said through a translator. "We have pretty much everybody healthy. From one through nine, the lineup is good. Everybody is feeling great right now, which is what you want going into the playoffs."

Blue Jays manager Charlie Montoyo spent over two decades in the Rays organization as a minor league manager and major league coach. He joined the Blue Jays in October, 2018.

"Our team knows, for us to start winning championships, we've got to go through Tampa Bay," Montoyo said.

Renato Nunez reached base three times in his return to the lineup and Cedric Mullins hit two triples for the Orioles.

Baltimore (25-35) also improved on a last-place finish in 2019, when they went 54-108. By winning their finale, the Orioles ensured they finished one game ahead of Boston for fourth.

"We've all gone through a lot this year, and it's been a grind in a lot of ways," Orioles manager Brandon Hyde said. "I really like our club."

Nunez started at DH after missing the previous three games because of a sore knee. He walked in the first, hit an RBI double in the third, and singled and scored in the fifth. He lined out in the seventh and struck out in the ninth.

Mullins was denied a home run when Blue Jays outfielder Jonathan Davis made a sensational leaping catch for the final out of the second. Davis sprinted into the corner and stretched above the wall to rob Mullins, managing to hold on to the ball as he fell onto the warning track.

Gurriel had a two-run home run among his four hits and Vladimir Guerrero Jr. added a solo shot for the Blue Jays, who needed a victory and a Miami win over the Yankees to move up in the standings. Miami won 5-0 but the Blue Jays couldn't make an early 4-1 lead hold up.

Mullins hit a two-run triple in the fourth and scored on a sacrifice fly by Austin Hays.

Rio Ruiz and Pat Valaika had RBI base hits in the fifth and a third run scored on Hanser Alberto's ground out.

Gurriel doubled in the second, homered in the third, singled in the sixth, and doubled again in the eighth.

Baltimore's Travis Lakins Sr. (3-2) pitched two scoreless innings for the win. Cesar Valdez worked the ninth for his third save in three chances.

Blue Jays: The wild-card round begins at Tampa on Tuesday, with LHP Blake Snell on the mound for the Rays. The Blue Jays have not named a starter, but Montoyo has hinted it may not be LHP Hyun Jin Ryu. Toronto went 3-4 at Tropicana Field this season. Four of the games were decided by one run, including three that went to extra innings.

Orioles: The first full-squad workout at spring training is scheduled for Feb. 21. The first exhibition game is Feb. 27 against Atlanta at Ed Smith Stadium in Sarasota.