Indians rally past Pirates, will host Yankees in playoffs 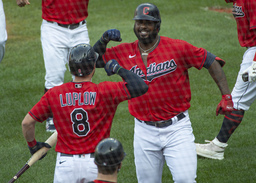 CLEVELAND (AP) The Cleveland Indians are staying home for the first round of the postseason - and the New York Yankees are coming to town.

Carlos Santana had four RBIs and delivered a go-ahead, two-run double in the seventh inning as the Indians rallied for an 8-6 win over the Pittsburgh Pirates on Sunday to gain home-field advantage for their AL wild-card series.

Cleveland (35-25) finished second in the Central and grabbed the No. 4 seed in the American League playoffs when the Chicago White Sox lost to the crosstown Cubs.

"We feel proud of our city and we wanted to play here," Indians designated hitter Franmil Reyes said. "We want to give the city of Cleveland what they deserve, which is to keep winning and a championship."

"We knew we had a chance to be at home, so that was our No. 1 goal," Cleveland closer Brad Hand said. "It wasn't entirely in our control, but we knew we had to win our game today first."

The Pirates held a 6-2 lead in the bottom of the sixth, when Reyes belted a three-run homer that chased starter JT Brubaker.

Nik Turley (0-3) entered for the seventh, hitting Cesar Hernandez with a pitch and giving up a double to Jose Ramirez before Santana scored them both to put Cleveland ahead 7-6.

A sacrifice fly by Reyes drove in Santana, who hit a two-run homer in the third after promising acting manager Sandy Alomar Jr. that he would make up for his error in the second.

"I told Sandy, `No worries, I'll get it back for us,'" said Santana, who went 3 for 3 with two doubles and three runs. "I live day to day, I play day to day and right now I'm focused on the baseball playoffs."

James Karinchak (1-2) struck out all three batters he faced in the seventh for his first win in the majors. Hand got four outs for his AL-high 16th save in 16 opportunities.

Ramirez, a leading AL MVP contender, doubled twice and scored two runs. He batted .442 with six homers and 18 RBIs over the final 12 games.

"Jose, that's my MVP there," Reyes said. "The way he carried us at the end was big. Really big, big for the team."

Pirates rookie Ke'Bryan Hayes singled in the first and homered in the third, becoming the first Pittsburgh player with eight straight hits since Andy Van Slyke in 1994.

The 23-year-old also reached base in 10 consecutive plate appearances and finished with a .376 batting average (32 for 85) after making his major league debut on Sept. 1.

Jose Osuna went 3 for 3 with two RBIs and two runs, belting a solo homer in the fifth, and Adam Frazier had a two-run double for Pittsburgh.

The Indians returned to the playoffs for the fourth time in five years after failing to qualify in 2019, when they were 93-69 and placed second in the division.

The Pirates (19-41) finished with the worst record in the majors under first-year manager Derek Shelton. They went 69-93 last season and were last in the NL Central.

"We jumped out early and just didn't complete the game," Shelton said. "We've talked all year about finishing games, and it still shows up on the last day of the season."

President of baseball operations Chris Antonetti announced that Alomar will pilot the Indians throughout the playoffs. Manager Terry Francona, who is recovering from gastrointestinal surgery, is staying in the team hotel and will serve as an adviser.

"I'm just like the mariner steering the boat while the captain is sleeping in the back," joked Alomar, who went 27-19 filling in for Francona. "Tito just told us to keep doing our thing."

LEADER OF THE PACK

Pittsburgh activated C Andrew Susac from the taxi squad after he spent all season at the team's alternate training site in Altoona, Pennsylvania. The 30-year-old last played in the majors with Baltimore in 2018.

Susac received extended cheers and a standing ovation from the Pirates' relievers when he first came up to bat.

Pirates: C Jacob Stallings (concussion) was placed on the seven-day injured list and RHP Keone Kela (forearm) was transferred to the 45-day IL. Stallings was struck by a backswing Saturday, but played the entire game.