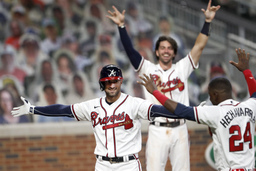 ATLANTA (AP) Nick Markakis promised before Thursday night's game that hitting was "the least of my worries" in his first start of the season.

He then showed why.

Markakis capped his dramatic return with a game-ending home run in the ninth inning that lifted the Atlanta Braves to a 4-3 win over the Toronto Blue Jays.

It was the first hit of the game for Markakis, who said he was upset about failing in previous attempts to drive in a run.

"To me, we really shouldn't have been in that situation," said the 36-year-old Markakis. "I had a couple chances to push a run across there and we didn't. That's the beauty of this game. You always get another opportunity."

Markakis announced his return one week ago, three weeks after opting out due to coronavirus concerns, Markakis lined the one-out homer off Wilmer Font (0-1) that carried into the restaurant behind the right-field stands.

Markakis was added to the active roster on Wednesday after changing his mind about sitting out the year.

Following the homer, Braves players circled home plate with plenty of distance, waving their hands in the air as Markakis finished his trot.

Manager Brian Snitker said he is not surprised Markakis, 36, came back swinging.

"That guy is going to look like that probably at 60 and be able to hit still," Snitker said.

Bo Bichette hit a homer in the fourth for the Blue Jays.

Right-hander Touki Toussaint gave the depleted Atlanta rotation a boost by setting career highs with his 6 2/3 innings and nine strikeouts.

It was an important start for a rotation which lost ace Mike Soroka to a season-ending torn right Achilles tendon on Monday night. The rotation also has lost Mike Foltynewicz, who was designated for assignment and then sent to the team's alternate training site.

Toussaint left the game with a 3-2 lead, but Blue Jays pinch-hitter Teoscar Hernandez singled up the middle off Tyler Matzek to drive in Rowdy Tellez to tie the game. Toussaint gave up four hits and three runs with no walks.

"I really didn't have my best slider or my best fastball command, but I'm able to grind and still give my team a chance to win," Pearson said.

Marcell Ozuna didn't look happy when a 96 mph fastball from Pearson sailed above his head in the fourth. Ozuna answered by lining a single to left field with an exit velocity of 110 mph.

Ozuna moved to second on Pearson's wild pitch to Nick Markakis, whose grounder to first advanced Ozuna to third. Adam Duvall's fly ball to left field drove in Ozuna for a 3-1 lead.

A roster snafu forced the Blue Jays to change their pitching plans in the game.

Montoyo tried to bring in Waguespack to open the sixth. Following a chat with home plate umpire Alan Porter, Waguespack left the field without making a pitch and Montoyo instead brought in Rafael Dolis.

"At the end of the day if he doesn't have it, there's nothing else I can say because the one he has is the one that counts," Montoyo said of Porter.

Snitker said he wasn't happy Toussaint had to sit in the dugout "because of a clerical error" while Dolis was allowed to have extra time to warm up on the mound.

The Braves activated LHP Will Smith from his rehabilitation assignment. Smith, who signed a $39 million, three-year deal, missed the summer camp following a positive test for the coronavirus.

Blue Jays: Thornton has right elbow inflammation and won't make Saturday's scheduled start at Boston. Montoyo hasn't named a fill-in starter for Thornton, who allowed one run in four innings and received no decision in his first start at Washington on July 27. INF Santiago Espinal was optioned to the alternate training site.

Braves: Smith was activated instead of pitching in a simulated game at the team's alternate site, as had been planned. Snitker said Smith, who was warming up for a possible 10th inning, "was raring to go."