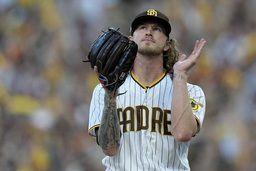 SAN DIEGO (AP) The scrappy San Diego Padres, largely rebuilt at the trade deadline, are finding their identity at just the right time.

In danger of heading to Philadelphia down 0-2 in the NL Championship Series, the Padres produced another huge rally in front of their rowdy fans to put some punch into the all-wild card matchup.

Brandon Drury hit a go-ahead, two-run single during a five-run outburst in the fifth inning and San Diego stunned Aaron Nola and the Phillies 8-5 on Wednesday to tie the NLCS at one game apiece.

"You go into their place, which is probably going to be as spirited as ours is, down 2-0 and that's an uphill battle," said veteran manager Bob Melvin, who has brought a calming presence in his first year as San Diego's skipper.

The Padres weren't rattled when they fell behind 4-0 in the second inning after getting just one hit during a 2-0 loss in the series opener Tuesday.

The fifth-inning surge started with Padres catcher Austin Nola hitting an RBI single off his younger brother that brought the sellout, towel-twirling crowd of 44,607 to life. Three innings earlier, the Phillies took a 4-0 lead with a rally that included bloop hits, a sun-aided double on a gorgeous, 92-degree afternoon and some shoddy Padres defense.

On Saturday night, spurred by the bottom of the order, the Padres broke loose for five runs in the seventh inning of a 5-3 win that eliminated the 111-win Los Angeles Dodgers.

"We need to continue to build that confidence," said Austin Nola, the No. 9 batter. "That's what we talked about all year. That identity is never giving up, never giving in. Every inning we're putting pressure on the other team to score and it's paying off."

Manager Rob Thomson said the Phillies need to approach this situation like they did the NLDS.

"We went into Atlanta, won the first one, lost the second one. Disappointing game. We had a day off and came back home in front of 46,000 raucous people and played really well. I expect to do the same thing," he said.

Blake Snell got the win and Josh Hader the save after striking out the side in the ninth to send the crowd into a frenzy. Aaron Nola, in the playoffs for the first time and off to a brilliant start before Wednesday, took the loss.

The Padres, playing in their first NLCS since 1998, appeared to be in deep trouble after Snell threw 37 pitches in the Phillies' four-run second.

San Diego began its comeback with homers on consecutive pitches by Drury and Bell to open the bottom of the inning. Drury lined a shot to left field and Bell lifted a fly ball deep to right that stayed just fair.

Bell and Juan Soto, who had an RBI double in the fifth, were obtained in a blockbuster trade with Washington on Aug. 2, the same day the Padres got Drury from Cincinnati. The day before, the Padres got Hader from Milwaukee.

When Austin Nola grounded out in the second inning, it was the first pitcher-batter matchup between siblings in postseason history.

Big brother came up again in the fifth with one out and Kim Ha-seong on first base. Aaron Nola threw over several times before Austin singled to right-center to bring in the speedy Kim, who was running on an 0-2 pitch. His helmet flew off between second and third before he scored with a headfirst slide.

"It's a typical plate appearance vs. my brother. I'm 0-2," Austin Nola said. "I might as well just walk up there and tell him to put two strikes on me because that's what it feels like. I just battle. I know the kind of pitcher he is. He's not going to give in. I'm just trying to hit something hard through the middle and good things happen."

Jurickson Profar singled, Soto hit an RBI double to tie the game at 4 and Machado struck out before Aaron Nola was pulled for former Padres closer Brad Hand.

Jake Cronenworth was hit by a pitch to load the bases. With fans on their feet and waving yellow rally towels, Drury singled to put the Padres ahead. Bell capped the really with a single to right. The Padres sent 11 batters to the plate, collecting six hits, a walk and a hit batter.

Aaron Nola hadn't allowed an earned run in picking up a win in each of the first two playoff rounds.

After winning 2-0 Tuesday on Kyle Schwarber's jaw-dropping, 488-foot homer and another homer by Bryce Harper, the Phillies went ahead with small ball in the second inning Wednesday.

Snell needed only six pitches to get through a 1-2-3 first but wasn't as lucky in the second.

Harper and Nick Castellanos opened the inning with bloop singles before Alec Bohm hit a sharp single to right to bring in Harper. After Jean Segura struck out, Soto, the right fielder, lost Matt Vierling's fly ball in the sun and it dropped behind him for an RBI double.

Edmundo Sosa golfed an RBI single that landed just in front of Profar in left field. Schwarber hit a weak grounder to first that Drury bobbled before stepping on the bag as Vierling scored.

Snell allowed four runs and five hits in five innings. He struck out six and walked one.

Aaron Nola was tagged for six runs and seven hits in 4 2/3 innings. He struck out six and walked none.

As for the brotherly showdown, he said: "I want to beat him. I want to go to the next round and let him go home."

Machado homered leading off the seventh and Philly's Rhys Hoskins homered on the first pitch from Robert Suarez in the eighth, ending the reliever's scoreless streak of 19 1/3 innings.