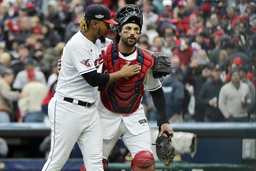 CLEVELAND (AP) The Guardians were certain of two things: Jose Ramirez would deliver, and Amed Rosario touched second base.

Ramirez connected for a two-run homer, Shane Bieber dominated Tampa Bay for 7 2/3 innings and the young Guardians played with poise in their postseason debut, beating the Rays 2-1 in the wild-card opener on Friday.

Ramirez's shot off Tampa's Shane McClanahan in the sixth inning - the Rays initially appealed whether Rosario stepped on second - helped Cleveland end an eight-game postseason losing streak and left baseball's youngest team one win from advancing in its first season as the Guardians.

Though short on experience, the Guardians seem to have everything else.

"At this point we're dealing with what we got in that clubhouse," Bieber said, brushing off the team's youth. "And that's a winning ballclub."

Bieber, rocked in his only other playoff appearance two years ago by the Yankees, was spectacular, allowing just three hits and striking out eight before being lifted the eighth to a thunderous ovation.

Emmanuel Clase took it from there, getting four outs for his first postseason save and finishing a game that took just 2 hours, 17 minutes - the fastest in the postseason since 1999 and Cleveland's quickest since its World Series-clinching win in 1948.

Jose Siri homered for the Rays, who dropped their sixth straight game overall and turn to starter Tyler Glasnow in Game 2 on Saturday to keep their season alive. The series winner plays the AL East champion New York in the Division Series starting Tuesday in the Bronx.

With 17 players making MLB debuts this season, the Guardians entered the playoffs unsure of what to expect. Fortunately, Ramirez and Bieber had been here before, and both came through for the AL Central champions.

With Cleveland down 1-0 after Siri's homer in the sixth and running out of outs, Ramirez delivered - as usual.

"Nothing surprises me," Rosario said of his teammate, who is batting .455 with homer and six RBIs in his last three playoff games. "For me, he's the best player in baseball."

"He's inevitable," Cleveland's ace said. "To do it right away, that was huge."

Rosario singled with one out and Ramirez, a four-time All-Star who finished second to Aaron Judge in RBIs in the AL this season, drove a 1-1 changeup over the wall for just his second postseason homer in 97 at-bats.

However, as the red-towel waving fans in Progressive Field screamed, Rays manager Kevin Cash appealed whether Rosario missed second. TV replays showed him slowing and touching the bag, but that didn't give Guardians manager Terry Francona any comfort as the Rays proceeded to challenge.

"When they start huddling like that, you start to get a little nervous," he said.

"It was kind of grainy," he said. "But it certainly looked like there was reason to take a look at it and let's see what New York had to say."

While the umpires waited for an official ruling, the crowd spontaneously sang "Jose ... Jose ... Jose," like never before, prompting Ramirez to pop out for a curtain call. The home run stood and Cleveland had a slim lead it protected.

McClanahan has given up just two homers all season on changeups.

McClanahan knew he made a mistake.

"Left it up," the left-hander said. "He's such a good hitter, you're not going to fool him with a bad pitch again in the same spot."

Tampa Bay didn't get its first hit of Bieber until the fifth, when Harold Ramirez bounced a single into center. But Bieber buckled down and got two outs before striking out Christian Bethancourt, the right-hander's third punch-out to end an inning.

When Francona pulled him in the eighth, Bieber left to roars and showed his appreciation by clapping into his glove.

"To hear that, to feed off that energy," Bieber said of Cleveland's crowd. "It seemed like every time there were two strikes they were willing a strikeout. And that felt great. Kind of helps me personally elevate my game. I don't suspect I'm the only one on our team that feels that."

Bieber's only postseason appearance was equally forgettable. In 2020, when he won the AL Cy Young Award leading the league in wins, strikeouts and ERA, Bieber was tagged for seven runs in just 4 2/3 innings against the Yankees in the wild card. Aaron Judge hit a two-run homer off him in the first.

The Rays have scored just nine runs during their six-game slide.

Still, Cash believes his team will find a way to push the series to a third game.

"We need to be resilient," he said. "I'm very confident in this group that they will respond the way they need to and compete and give us a good opportunity to win."

Rays: Glasnow will be on a pitch count in his third start since returning from Tommy John surgery. It's his first postseason start since Game 5 of the 2020 World Series. The left-hander threw 64 pitches in his last outing and Cash will add one inning "and 15 to 20 more pitches" to Glasnow's workload. He's 2-5 with 6.56 ERA in eight postseason starts.

Guardians: McKenzie makes his first postseason start. The lanky right-hander went 2-0 with a 2.09 ERA in his last six starts, striking out 41 in 38 2/3 innings. More importantly, he only walked five after being plagued by wildness earlier this season.