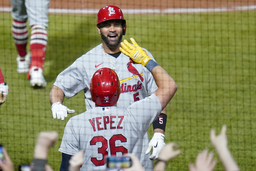 The 42-year-old slugger connected off right-hander Mitch Keller, pulling a two-run shot into the left-field stands to snap a scoreless tie in the sixth. It was Pujols' 35th career home run at PNC Park, his most at any visiting ballpark.

"Passing Babe Ruth is a big deal," Cardinals manager Oliver Marmol said. "Seeing him hit a home run in that situation was fun to watch. You feel pretty good about where you're at whenever he swings, and his home runs have been very meaningful."

Pujols, who did not speak with reporters following the game, had been hitless in eight career at-bats against Keller.

"It's an amazing time to be around him and being around this team," Cardinals starting pitcher Jose Quintana said. "He keeps believing in his abilities. The most impressive thing is he homers, then he's ready for the next one. He wants to keep going."

With the score tied 2-all in the ninth, the Pirates loaded the bases when Ke'Bryan Hayes, Miguel Andujar and Rodolfo Castro drew consecutive walks from Giovanny Gallegos (3-6).

JoJo Romero relieved and walked Oneil Cruz on four pitches to end the game. It was the first walk-off plate appearance of the rookie's career.

Before the game, the Cardinals signed Gallegos to a two-year contract worth $11 million that runs through 2024.

Yohan Ramirez (4-1) pitched a scoreless ninth for the win.

"There were a lot of signs of resilience," Pirates manager Derek Shelton said of the winning rally.

The Pirates avoided a second straight 100-loss season - at least for now - by beating the NL Central champion Cardinals for the second consecutive day.

Paul Goldschmidt led off the St. Louis sixth with a single before Pujols connected. Keller was chased after giving up two more singles in the inning.

The Pirates rallied to tie it at 2. Bryan Reynolds doubled home a run in the sixth and Jack Suwinski homered off Andre Pallante in the eighth.

"It's just a nice ending to the season to get there," Mikolas said. "It's a mark you don't see a tremendous amount of guys get to anymore, so it's always kind of nice to separate yourself from the pack."

St. Louis used the starters in tandem as Marmol attempts to set his staff for postseason play. The Cardinals host a best-of-three wild-card series beginning Friday, and Marmol has not decided on his rotation.

"It allows us the flexibility to still start them in any game of that three-game set," he explained before the game.

RHP Nick Mears was recalled from Triple-A Indianapolis and RHP Luis Ortiz was optioned to the same club. Ortiz made his major league debut Sept. 13 and went 0-2 with a 4.50 ERA in four starts.

Cardinals: 3B Nolan Arenado was scratched from the lineup 15 minutes before the game because of a slight quadriceps strain. He might also sit out Tuesday night as a precaution. . OF Tyler O'Neill (strained left hamstring) went through a full baseball workout but the Cardinals are still uncertain if he will be ready to play by Friday. . RHP Jordan Hicks will either be activated from the injured list and pitch in Wednesday's regular-season finale or throw a bullpen that day.

Cardinals: RHP Dakota Hudson (8-7, 4.07 ERA) will start Tuesday night. He has allowed one unearned run over 11 innings in two appearances since being recalled from Triple-A Memphis on Sept. 21. RHP Jack Flaherty is expected to pitch in relief as a postseason tune-up.

Pirates: RHP JT Brubaker (3-11, 4.58) will come off the injured list and start. He has been out since Sept. 16 with right lat discomfort.