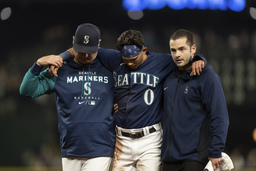 SEATTLE (AP) The Seattle Mariners will start their first playoff trip in two decades on the road after a costly 4-3 loss Monday night to the Detroit Tigers, who got a two-run homer from Javier Baez.

Sam Haggerty singled with two outs in the ninth inning and hurt his left groin while sliding into second base on a successful steal. He needed assistance to leave the field, an arm draped over manager Scott Servais and an athletic trainer.

Haggerty is scheduled for an MRI on Tuesday.

"Getting to the end of the regular season is always a challenge," a reserved Servais said.

Seattle, assured a postseason spot for the first time since 2001, will play a best-of-three series at Toronto or Cleveland beginning Friday.

"With everything that happened today, we're not going to be able to host a playoff game - in the first series - here at T-Mobile Park, so now we've got to adjust a little bit," Servais said. "The focus right now is trying to get as healthy as we can, as rested as we can, before we start our series here on Friday, and that will be challenging."

Part of that plan came together as Seattle star Julio Rodriguez, back from a trip to the injured list caused by a lower back strain, was the designated hitter and likely will be in center field for one of the games in Tuesday's doubleheader. The rookie hit a 110 mph single up the middle leading off the first, advanced when Ty France was hit by a pitch and tied the score at 1 when he moved up on flyouts by Mitch Haniger and Eugenio Suarez.

Rodriguez dropped another hit between three fielders in the third inning and cut the lead to 4-3 with an RBI single in the seventh against Jose Cisnero.

Cisnero struck out France to end the threat, and Andrew Chafin struck out two in a scoreless ninth for his third save as the Tigers held on for their 11th victory in 13 games.

Haggerty's injury cast a bit of a pall over the Mariners after a weekend of celebration since the team clinched a wild-card berth Friday night.

"Haggs has had such a great season," Servais said. "Kind of like that sparkplug guy, you fire him in there and he makes things happen. And sure enough, he gets a big hit late in the game tonight. He got a great jump. He just kind of let his guard down. I think he thought he had the base stolen pretty easy, and he did, he just waited too late to slide and caught the bag wrong."

Seattle rookie George Kirby (8-5), bidding for a postseason start, allowed four runs, six hits and three walks in four innings. Kirby entered with the highest strikeout-to-walk ratio by a rookie since 1900 at 6.74.

"Tonight was just not a typical night we've seen from George Kirby really all year," Servais said. "Just not real sharp. He walked more guys than he normally does in a month in one game tonight."

Akil Baddoo walked leading off, stole second and scored on Miguel Cabrera's two-out single. Riley Greene walked with two outs in the third and Baez hit a two-run homer for a 3-1 lead.

Victor Reyes extended the lead with an RBI single in the fourth that bounced out of right fielder Mitch Haniger's glove on a tough shoe-top scoop attempt.

"We made him work and probably did the best we could to put as much pressure on their 'pen for both today and tomorrow," Tigers manager A.J. Hinch said. "I know they probably didn't want to pull Kirby when they had to, but we worked it."

Adam Frazier had two hits for the Mariners and drove in a run.

Seattle optioned infielder Abraham Toro to Triple-A Tacoma. Toro is expected to join a group of players in the Mariners system currently working out in Arizona in case they are needed during the playoffs. Seattle also reinstated catcher Curt Casali from the paternity list and optioned catcher Brian O'Keefe to Tacoma.

Luis Castillo is in line to start the wild-card opener.

"He's got all the intangibles, plus the stuff, and he likes pitching in big games and this is going to be a big game," Servais said. "I say all that and we can't get too far down the road. We've got four games left to play."

Tigers: LHP Tarik Skubal is with the team in Seattle as he recovers from surgery to repair the flexor tendon in his left arm. Skubal has not pitched since Aug. 1 and underwent surgery in mid-August. But he played his college ball at Seattle University and the Tigers wanted to have him around for a little bit at the end of the season.

"He's such a big part of our culture and our presence and we miss him on the field, obviously, but it's gonna be a while," Hinch said. "But it's good to see a familiar face and get him back in a team environment."

Servais shuffled his pitching plans after Monday's game. RHP Chris Flexen (8-9, 3.64 ERA) will start the first game Tuesday instead of LHP Marco Gonzales, and the second game will be handled by the bullpen.