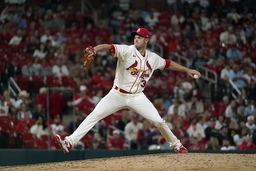 Pujols singled to left with the bases loaded in the first inning driving in Brendan Donovan and Lars Nootbaar to give St. Louis a 2-0 lead. The 42-year-old Pujols, retiring after the season, hit his 701st homer a night earlier. He has 2,211 RBIs, three behind Babe Ruth for the second-most in major league history.

"It's really hard to even really fathom because how long that would take for any individual to to do that," Dickerson said. "It's amazing. I don't think anybody can really comprehend it unless you played with him every single year and watched it. I don't think you can really put it in words."

Two batters later, Dickerson lined an 0-1 fastball 433 feet into the right-center field bleachers for his sixth home run of the season and his second career grand slam to increase the Cardinals' lead to 6-0.

"To do that and this close to postseason just kind of gets your confidence going," Dickerson said "It just feels good to do it and know that you can help the team in a drastic way whenever the time may be."

Jordan Montgomery (9-6) allowed two runs on four hits in six innings and struck out five batters after losing his previous three starts. Montgomery went 5-0 in his first eight starts since being acquired from the New York Yankees on Aug. 2.

"I left a lot of heaters up tonight," Montgomery said. "Curveball and changeup got me through the game, but I made fastball pitches when I needed to today."

Luis Ortiz (0-2) allowed six runs on three hits and walked three batters in 2/3 of an inning in his fourth career start.

"This kid's had a really good year at all levels from double-A to triple-A and here," Pirates manager Derek Shelton said. "He had a bad outing and had trouble finding his arm slot. This is one club in the National League that you have to throw the ball over the plate to, and we just didn't do that today."

Jason Delay hit a two-run single in the second inning to pull cut Pittsburgh's deficit to 6-2.

Nolan Arenado stroked an RBI double, Alec Burleson added a two-run single, and Pujols scored when Yadier Molina grounded into a fielder's choice in the bottom of the inning to expand the lead to 10-2.

The Cardinals improved to a major league-best 21-7 (.750) and 11-3 at home on Saturdays this season. The 21 Saturday wins are the most in franchise history.

Pirates: Placed RHP Wil Crowe (right elbow inflammation) on the 15-day injured list and recalled RHP Junior Fernandez from triple-A Indianapolis. Fernandez went 0-0 with a 2.93 ERA in 13 games for St. Louis before he was claimed off waivers by the Pirates on Sept. 7 after being designated for assignment.

"It's nothing that we're concerned about," Shelton said. "It's something that if we didn't have five games left we'd probably be having a different conversation."

Cardinals: RHP Jordan Hicks (right arm fatigue and neck spasms) threw a bullpen session before Friday night's game and is scheduled to throw another on Sunday. Cardinals manager Oliver Marmol said Hicks will be with the team in Pittsburgh for its final regular-season series that starts Monday.

RHP Adam Wainwright (11-11, 3.51 ERA) will make his major league record 328th career start with longtime batterymate Molina Sunday in what will likely be Molina and Pujols' final career regular-season home game. Molina and Pujols both announced prior to the season that they intend to retire after the season. RHP Roansy Contreras (5-5, 3.72 ERA) will start for Pittsburgh.