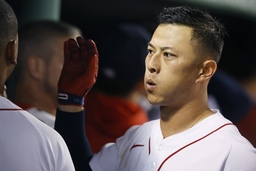 BOSTON (AP) Cedric Mullins homered on the second pitch of the game, Anthony Santander went deep twice and the Baltimore Orioles outslugged the Boston Red Sox 14-8 on Monday night to gain a little ground in the playoff race.

Gunnar Henderson hit a two-run homer and Mullins tripled in two runs for the Orioles (80-73), who moved within 3 1/2 games of idle Seattle for the final AL wild card.

Austin Hays added a solo shot for Baltimore in a game delayed by rain for 1 hour, 40 minutes.

"We're confident," Orioles starter Jordan Lyles said. "We didn't love the way the Houston series finished up, the second half of those four games, but we know how talented we are and how good we are. We can get on a run."

The surprising Orioles have nine games left in their turnaround season. They lost more than 100 games in their three previous full seasons.

Rob Refsnyder hit a three-run homer and J.D. Martinez had a solo shot for the last-place Red Sox (72-81). Boston dropped its season-high sixth consecutive game, one night after it was eliminated from postseason contention.

The Red Sox got home in the early morning after a rain-delayed loss Sunday night in New York.

"I don't want to sound sarcastic, but the 15th and the 30th you get paid for this," manager Alex Cora said. "You've got to show up, just like you right now. You're doing your job."

Red Sox shortstop Xander Bogaerts, in a tight race with Yankees slugger Aaron Judge and Minnesota infielder Luis Arraez for the AL batting crown, went 1 for 5, dropping his average to .313.

"We swung the bats extremely well tonight. We needed it," Orioles manager Brandon Hyde said. "After the rain delay, there were so many guys down in the 'pen. I was going to have to pitch a couple of guys three days in a row if it got to that. Fortunately, Spencer Watkins really picked us up."

Mullins hit a pitch from Connor Seabold (0-4) into the Baltimore bullpen for his 16th career leadoff homer and fifth this season.

Mullins' two-run triple highlighted a four-run second inning that gave the Orioles a 5-0 lead after Jorge Mateo's RBI double. Mullins scored when catcher Reese McGuire threw the ball into left field trying to pick him off.

Santander and Henderson both homered in the sixth to make it 11-5, with probably fewer than 2,000 people left at Fenway Park from the announced crowd of 25,634. Santander's two-run shot, his 31st homer of the year, increased it to 13-5 an inning later.

Santander said it meant a lot to him to reach 30 home runs and he was thankful to be healthy all season.

"I think that's been the biggest key for me to be able to reach that mark this year," he said through a translator.

Baltimore second baseman Rougned Odor snagged Rafael Devers' hard, one-hop grounder as he was falling to the seat of his pants, then fired to second while sitting to start an inning-ending double play before umpires called for the tarp.

With Judge trying to match Roger Maris' American League record of 61 home runs in a season, the Yankees-Blue Jays game was shown on the center field video board during the rain delay.

Orioles: INF Ramon Urias (neck/shoulder spasms) was out of the lineup for the second straight day.

Red Sox: RHP Garrett Whitlock had surgery on his right hip in New York. He's expected to be ready for the start of spring training. . Devers and OF Alex Verdugo were back in the lineup after getting Sunday night off.