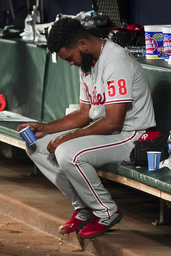 ATLANTA (AP) William Contreras hopes Ronald Acuna Jr. is starting to hit his stride, even if it's mid-September after being slowed by knee soreness most of the year.

"We're talking about the best player in the league and thank God he's on our team," Contreras said via a translator. "He brings the energy to us."

Acuna hit a go-ahead, two-run homer in a six-run eighth inning off Seranthony Dominguez and the Atlanta Braves rallied for a 7-2 victory over the Philadelphia Phillies on Friday night.

The opposite-field shot erased a 2-1 deficit and touched off a wild celebration at sold-out Truist Park, helping the Braves stay a game behind the first-place New York Mets in the NL East.

Contreras connected off Phillies starter Ranger Suarez to make it 1-all in the fourth and added an RBI single off Dominguez to make it 4-2. Contreras went 3 for 4.

Dominguez walked pinch-hitter Eddie Rosario to begin the eighth and Acuna attacked on the first pitch he saw, sending a 98 mph sinker 383 feet into the seats in right-center for his 12th homer. Austin Riley doubled, advanced on a walk and scored on Contreras' hit up the middle. Michael Harris II added an RBI single and Ozzie Albies a two-run bloop double to make it 7-2.

Acuna played right field instead of serving as designated hitter Friday, freeing manager Brian Snitker to use Contreras, an All-Star like his teammate, as DH. Acuna's surgically repaired right knee has given him fits through much of the season as he's returned from missing the second half of last year.

"Ronald is a teammate of mine and obviously want the best for him and it was a good opportunity for him to get the DH (at-bats)," Contreras said. "We want to take care of him. In that sense it hurt my playing time a little bit, but I'm glad we were able to do that to take care of Ronald's knee."

Schwarber made it 1-0 to begin the fourth when he got the first hit off Max Fried at Truist Park since the fifth inning of an Aug. 30 loss to Colorado, a span of nine innings. The ball sailed 410 feet into the Braves' bullpen and left his bat at 110 mph.

Suarez held the Braves to one run on two hits in six innings after going 0-2 with a 5.06 ERA in his three previous starts against Atlanta this year. The lefty walked three and struck out four, lowering his road ERA to 1.63 in nine starts since June 7.

The Phillies began the day 2 1/2 games up on San Diego for the second wild card. Defending World Series champion Atlanta had lost four of five but have a 66-28 record since June 1, best in the majors over that span.

After Contreras tied it at 1 with his 18th homer - a 439-foot shot that came off his bat at 112 mph and landed in the seats in left-center - Segura responded with his 10th homer to make it 2-1 in the fifth.

Jesse Chavez (4-1) earned the win after getting the final out of the eighth. Dominguez (6-5) allowed three hits and five runs in two-thirds of an inning.

"Any time you lose a game like that, it's tough," Phillies interim manager Rob Thomson said. "But these guys know what's ahead of them and they're going to bounce back just like they have all year."

Fried threw a season-high 110 pitches, allowing two runs and four hits with three walks and four strikeouts in six innings. The All-Star lefty's most recent start at Truist Park, a 7-1 win over Miami on Sept. 4, ended with five innings of hitless ball in a rain-shortened outing.

"I felt like I could've been a little bit better," Fried said. "Keeping us in the game was definitely where I was at. That eighth inning was huge. Put together great at-bats and really put us over the edge."

The teams began the night having split 12 games against each other this season, but the Braves have won nine of their last 12 against Philadelphia at Truist Park, outscoring the Phillies 63-40.

Phillies: RHP Zack Wheeler, on the injured list with forearm tendinitis, faced hitters before the game and was hitting 96-98 mph on the radar gun, Thomson said. Provided he has no setbacks, Wheeler will start Wednesday against Toronto and will be on a pitch count. ... INF Edmundo Sosa was placed on the 10-day IL with a right hamstring strain. Yairo Munoz was recalled from Triple-A Lehigh Valley. ... 1B Rhys Hoskins tried to swing but is still sore after getting hit on the hand by a pitch Wednesday against Miami and was held out of the lineup. ... RF Nick Castellanos (right oblique strain) will start swinging in the next couple of days. He's been playing catch and throwing to bases and doing some outfield fundamentals, but still has stiffness. There is no timetable for his return.

Braves: Albies returned from the injured list after the two-time All-Star missed 81 games with a broken left foot. He went 1 for 4. ... RHP Kirby Yates (right elbow inflammation) was placed on the injured list. William Woods was recalled from Triple-A Gwinnett.

He has 31 homers in the leadoff spot to snap a tie with Jimmy Rollins in 2007 for the most in a single season in franchise history.

Phillies RF Daulton Guthrie raced 124 feet to foul territory to make a sliding catch near the wall for the second out of the fifth.

There were some empty seats, but the Braves still announced a crowd 42,578, the 36th sellout of the season.