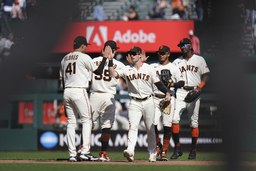 SAN FRANCISCO (AP) Carlos Rodon struck out eight in five dominant innings before leaving with a blister and the San Francisco Giants slowed down the Atlanta Braves 4-1 Wednesday to win the series.

"It's just something I've been dealing with all year," Rodon said. "Whenever I get a lot of pressure on that slider, it just tends to crack and get that blood blister, so just something we've got to manage."

Rodon (13-8) allowed just an unearned run on two hits and a walk. He moved into second in the majors with 220 strikeouts, behind only New York Yankees ace Gerrit Cole (228).

"We felt like where we were in the season, it was the right decision to get him out of there," Giants manager Gabe Kapler said. "I don't anticipate (him missing a start) but we're going to be cautious with Carlos and talk to him tomorrow and see how he's feeling and go from there."

Atlanta lost two of three to the sub-.500 Giants. The Braves began the day a half-game behind the NL East-leading New York Mets.

"You're trying to win every game," Atlanta manager Brian Snitker said. "Every game is big. They all mean a lot now."

Austin Wynns drove in three runs and J.D. Davis added two hits and an RBI as San Francisco won for the fourth time in its last five games.

Giants relievers Tyler Rogers, Scott Alexander, John Brebbia and Camilo Doval combined for four scoreless innings. Doval struck out the side in the ninth inning for his 23rd save in 26 opportunities.

"I think we're more than capable (of being) a winning team," Rodon said. "Unfortunately, the way it's gone this year, it's been up and down for us and we've kind of been behind often. But as of late we've played really well."

Robbie Grossman went 3 for 3 with an RBI for the Braves.

Charlie Morton (8-6) was charged with four runs in 5 1/3 innings for his first loss since July 27. The right-hander allowed four hits and two walks with seven strikeouts.

Davis put the Giants back in front with an RBI double in the fourth. Wynns singled home two more in the sixth.

Braves: 2B Ozzie Albies, out since June 14 with a broken left foot, went 5 for 5 with a game-winning home run in a rehab appearance with Triple-A Gwinnett on Tuesday. He was scheduled to start again Wednesday night.

Giants: LHP Alex Wood (left shoulder impingement) has not started throwing yet and may not return this season. "We're not going to push him to make starts for him if his body isn't ready to make starts for us," Kapler said. "But we still are holding out hope that he's able to, for both him and for us, make starts." ... OF Luis Gonzalez was held out of the lineup with back stiffness.