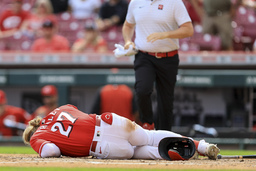 CINCINNATI (AP) Bryan Reynolds homered for the second straight game and drove in two runs, leading the Pittsburgh Pirates over the Cincinnati Reds 6-1 Tuesday in a doubleheader opener.

Cincinnati's Jake Fraley was hit on the head by Manny Banuelos' 93.5 mph fastball in the eighth inning. Down for several minutes, Fraley got to his feet and was led off the field by an athletic trainer.

"It's part of the game," Fraley said. "Any time you go to the plate, there is a chance that it could happen. ... It could have been a lot worse. It hit me straight between the C-flap and the brim. It was straight off the helmet. Most of the time when it hits you that square, the manager doesn't give you a choice. Being that late in the game, it is better to check and make sure everything is good."

Cal Mitchell hit a two-run shot for his first homer since July 22 and Ke'Bryan Hayes added his first home run since Aug. 7, helping last-place Pittsburgh win back-to-back games for the first time since Aug. 18 against Boston and Aug. 19 against Cincinnati. The Pirates (53-88) are assured of their fourth straight losing season and the Reds (56-84) of their seventh in nine years but first since 2019.

The game drew 9,338, the Reds' fourth-lowest at home this season. Three of Cincinnati's six home crowds under 10,000 have been for games against the Pirates.

Pittsburgh hit three homers for the second straight game, sending the fourth-place Reds to a fourth consecutive loss after winning three in a row.

Johan Oviedo (1-1) pitched hitless ball into the fifth and allowed one hit over five shutout innings for his first win since his Sept. 1 recall from Triple-A Indianapolis. He struck out four and walked two while lowering his earned-run average to 3.34 in the longest of his three Pittsburgh starts.

"He's made some adjustments," Shelton said. "He was more clean on the mound. His slider was really good and effective."

"I got more work in the bullpen," Oviedo said. "I was trying to get ahead. That's my best five innings in a while. I was just trying to get through five. Next time, I hope to go deeper."

Luis Cessa (3-3) gave up five runs and eight hits - including three homers - in his sixth start since being moved from the bullpen. He struck out five and walked one in 5 2/3 innings while slipping to 0-2 as a starter.

Reynolds hit a solo home run in the first inning in Monday's 6-3 Pirates win and followed with a third-inning RBI single for a 1-0 lead Tuesday.

"Bryan getting us that early lead is helpful," Shelton said.

Hayes hit his seventh homer of the season for a 2-0 lead in the fourth, a drive into the Reds bullpen in left-center field. Reynolds followed in the fifth with a shot into the right-center field seats.

Mitchell knocked out Cessa with a line drive into the right field seats with Chavis aboard in the sixth.

"The scouting report said they are a patient team," Cessa said. "I guess they know me from the Yankees. I have to pay better attention to Reynolds and Hayes. A couple first pitches, that was the key to my outing today. They were aggressive early in the count. I threw 90 plus pitches. That's a good sign. I 100-percent prefer to be a starter."

Dowdy, promoted as Cincinnati's 29th player for the doubleheader, became the major league-leading 64th player for the Reds this season. The team already had set a club record for players used in one season.

The Reds and Pirates have played three doubleheaders in one season for the first time since 1965. They split the first two.

Pirates: Reds reliever Kyle Dowdy hit Tyler Heineman with his first pitch after relieving Cessa in the sixth. Heineman stayed in the game.