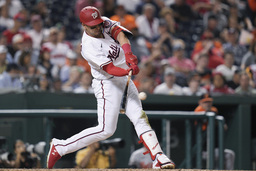 WASHINGTON (AP) Baltimore Orioles first baseman Ryan Mountcastle told former teammate and current Washington Nationals reliever Hunter Harvey over dinner Monday he would take him deep if he got the chance during a two-game series this week. Harvey countered he would he hit Mountcastle in the back.

Mountcastle's trash talk proved prophetic Tuesday night, as he homered off Harvey to help the Orioles beat the Nationals 4-3.

"I got him," Mountcastle said. "It's probably one of my favorite home runs I've ever hit."

Mountcastle and the Orioles moved within five games of Tampa Bay for the AL's final wild-card spot. The Nationals have lost four in a row and six of their last seven to fall a season-high 44 games under .500 at a majors-worst 49-93.

Mountcastle led off the fifth with his 22nd homer, a shot to right-center off Harvey (1-1) to tie it at 3. The former Baltimore prospect said he was not surprised he couldn't calm down facing his former team.

"I figured it would be, especially with Mountcastle," Harvey said. "The dude was in my wedding. I talk to him (just) about every night. When he got in the box, I was like `Oh, here we go.' I just couldn't calm down."

Mountcastle grinned as he rounded first base, and Harvey couldn't help but to smile as well.

"I started laughing," Harvey said. "That's the first time I ever laughed giving up a home run. It was hard to hide that emotion just because we're so close. We talk so much trash. He looked at me and was laughing and I knew my phone was going to get blowed up and I knew he was going to wear me out. I was like `This is the worst-case scenario.'"

Gunnar Henderson then doubled, went to third on Ramon Urias' single and scored on Austin Hays' bloop double for the go-ahead run.

"For me, that was the best at-bats he's taken in months," Baltimore manager Brandon Hyde said.

Baltimore's Dean Kremer (7-5) allowed three runs in five-plus innings, yielding eight hits while striking out one. Felix Bautista worked around a leadoff walk in the ninth for his 13th save in 14 attempts.

Bautista has retired 33 of the 38 batters he has faced since surrendering a home run to Boston's Xander Bogaerts on Aug. 21.

Baltimore opened the scoring in the first on Henderson's RBI single. The Nationals tied it in the bottom of the inning on Luis Garcia's run-scoring double, then went ahead on Luke Voit's RBI single and Garcia's RBI grounder in the third. The Orioles cut it to 3-2 when Cedric Mullins grounded into a double play in the fourth.

Orioles: 2B Rougned Odor, who left Sunday game after being hit on the right hand, was available to pinch hit. . RHP Rico Garcia cleared outright waivers and was assigned to Triple-A Norfolk.