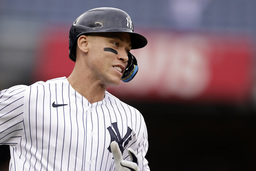 NEW YORK (AP) The Yankees threw a team from the 90s at the Minnesota Twins - as in uniform numbers usually limited to spring training.

Aaron Judge started the comeback from a three-run deficit with his major league-leading 55th home run and Oswaldo Cabrera capped a two-run 12th inning with a game-ending single.

Judge (No. 99) was joined by Nos. 95 (Cabrera), 91 (shortstop Oswald Peraza), 97 (reliever Ron Marinaccio) and 90 (center fielder Estevan Florial) to give the Yankees five players with jerseys in the 90s. Winner Greg Weissert (3-0), who relieved with the bases loaded in the top half and got two straight outs, had a relatively low No. 85.

"You can see the energy they bring," starter Domingo German said through a translator. "They bring so much energy to the clubhouse."

Cabrera also threw out a runner at the plate in the 10th for the AL East leaders, the fifth outfield assist for Cabrera since his debut on Aug. 17..

"We love his pose and his makeup," Yankees manager Aaron Boone said. "He's not afraid."

Peraza got his first three big league hits and scored a run as New York improved to 113-39 against the Twins since 2002, including the playoffs.

Judge homered for the fourth straight game, driving a changeup to left in the fourth inning, the only blemish of Louie Varland's otherwise outstanding major league debut.

Judge set the Yankees record for right-handed hitters by surpassing the 54 homers hit by Alex Rodriguez in 2007. The Yankees' season record of 61 was set by Roger Maris in 1961, one more than Babe Ruth's high of 60 in 1927.

Varland, a 24-year-old right-hander, gave up three hits and one walk in 5 1/3 innings with seven strikeouts. He averaged 93.9 mph with 44 fastballs, mixing in 19 changeups and 17 sliders.

"I'm glad it's over because there's a lot of anxiety," the St. Paul native said. "I couldn't really feel my legs the first batter. After that first out though, things kind of went back to normal."

His first strikeout was Judge, on a changeup.

"The perfect one to do my first strikeout," Varland said.

He said the callup "completely blindsided me." Twenty-three family and friends were on hand, visible on the third base side in a sparse crowd for the makeup of Tuesday's rainout.

"It's like watching a movie. We're just floating around. He deserves this so much," said his mom, Kim. "It's overwhelming joy. He's been a fan forever and to get the hometown team is amazing, amazing."

Jose Miranda, a cousin of "Hamilton" creator Lin-Manuel Miranda, hit a two-run homer inside the left-field foul pole in the first and Gilberto Celestino had an RBI single in the third.

Gleyber Torres tied it at 3 for the injury-depleted Yankees with a two-run homer in the sixth off Griffin Jax. Giancarlo Stanton, Anthony Rizzo, DJ LeMahieu, Josh Donaldson, Andrew Benintendi and Matt Carpenter were among those hurt or unavailable.

After Celestino's RBI single off Marinaccio gave Minnesota a 4-3 lead in the 12th, Weissert (3-0) retired Carlos Correa on a popout and Miranda on a flyout.

Isiah Kiner-Falefa hit a run-scoring single off Trevor Megill (3-3) leading off the bottom half to score the automatic runner. Kiner-Falefa stole second with one out and Jose Trevino dumped a single into right field, then reached second in a rundown as IFK slid safely back to third.

After Peraza flied out, Cabrera came to the plate in an 0-for-25 slide. The rookie grounded a curve for an opposite-field single to left that ended a 4-hour, 3-minute opener.

Minnesota made a season-high four errors.

Yankees: Rizzo went on the injured list, retroactive to Saturday, due to headaches following an epidural injection for lower back pain. Donaldson was placed on the paternity list, RHP Luke Bard was designated for assignment, INF Ronald Guzman's contract was selected from Triple-A Scranton/Wilkes-Barre, RHP Deivi Garcia was recalled from the RailRiders and INF/OF Miguel Andujar was brought up from Triple-A as the 29th man for the doubleheader.

Former Yankee RHP Sonny Gray (7-4, 3.10), pushed back a day because of a sore hamstring, is to start Thursday's series finale for Minnesota. LHP Nestor Cortes (9-4, 2.68 ERA) could be activated following a groin strain to start for New York.