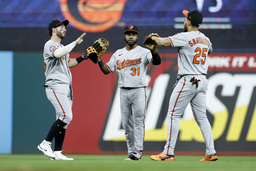 CLEVELAND (AP) One of the season's biggest surprises, the Baltimore Orioles weren't looking for validation on their road trip. They found it anyway.

Rookie Kyle Bradish held Cleveland to two harmless singles in seven innings and Cedric Mullins homered on Shane Bieber's first pitch, leading the Orioles to a 3-0 win over the Guardians on Thursday night.

After winning two of three at AL West-leading Houston, the Orioles, who lost 110 games last season, came to Cleveland and did the same thing to the Central's top team.

"I think it just puts us on notice that we're a for real team this year," Bradish said. "We're going to come in and play everybody hard. It doesn't matter who you are."

Bradish (3-5), who spent time on the injured list with shoulder inflammation, hasn't allowed a run in 15 straight innings after going more than three months without a win.

The right-hander was only in trouble once, but regrouped after walking two in the third by striking out Amed Rosario and retiring All-Star Jose Ramirez on a routine fly to left.

"Kyle Bradish," said Orioles manager Brandon Hyde, pausing to soak in the performance. "He gave up one hit for me. The first hit was borderline, at best, and a chopper through and that was it without his best stuff, without his best command."

Cionel Perez worked a perfect eighth and rookie Felix Bautista finished off the two-hitter for his 11th save.

Baltimore lost the opener before posting consecutive shutouts and holding the Guardians without a run over the last 21 innings.

Cleveland's division lead shrunk to one game over idle Minnesota.

Mullins bashed the first of the Orioles' three homers off Bieber (8-8), who struck out 11 in seven solid innings but couldn't keep the ball inside the fences. Anthony Santander and Ryan Mountcastle also homered for Baltimore.

"It happens from time to time," Bieber said. "You hope it's not a leadoff homer on the first pitch of the game, but that was the case. Found myself on my heels a little bit but just tried to make the most of it and go out there and compete."

Although the Guardians are scuffling a bit, Bieber doesn't sense an imminent collapse.

"There might be a little sense of frustration the last couple of days but we don't have the luxury of being that way," Bieber said when asked if the team is getting tight. "Why change now? I'm excited to see how we bounce back tomorrow. It should be a non-issue, a non-factor. Start a new series and go win it."

Orioles rookie Gunnar Henderson, one of baseball's highest-rated prospects who homered in his MLB debut on Wednesday, went 1-for-4 and showed off his elite defense at shortstop.

In the fourth, Henderson fielded a tough short hop, alertly side-stepped and touched second for the force and threw to first for a double play. Henderson made a diving stop to take a single away from Amed Rosario in the sixth, then popped to his feet and rocketed a throw to get Cleveland's speedy shortstop.

The Orioles didn't waste a second against Bieber as Mullins and Santander both connected on their first pitch from the right-hander.

The official scorer was in the middle of announcing the game-time temperature when Mullins drilled his 12th homer - fourth leading off in 2022 - into the right-field seats. One out later, Santander drove a changeup over the wall for his 24th homer and Mountcastle's 19th longball made 3-0 in the fourth.

Bradish is the first pitcher in Orioles history (since 1954) to have consecutive outings of seven or more scoreless innings and two or fewer hits. He's the first MLB pitcher to do it since Max Scherzer last season.

Guardians manager Terry Francona isn't a big believer in team meetings. However, he made an exception before the series finale.

With his young club leading its division and in the thick of a postseason race on Sept. 1, Francona wanted his players to appreciate where they are - and what's ahead.

"I just wanted them to remember, hey, it's not supposed to be easy," Francona said. "We're playing against these teams that are built for October and we're kind of holding our own. I just wanted some of them to stay in the moment."

Orioles: Top pitching prospect Grayson Rodriguez threw 31 pitches for High-A Aberdeen in his first appearance since suffering a strained side muscle on June 1.

Guardians: LHP Antony Gose, who has been out since early July with an elbow injury, received an injection designed to alleviate pain and lubricate the joint. Francona said the hope is the shot allows Gose to pitch again this season. If not, he'll explore other options.