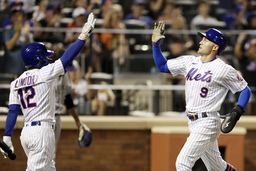 Starling Marte added an RBI double in the seventh for the Mets, who moved three games ahead of second-place Atlanta in the NL East when the Braves lost 6-5 in St. Louis.

"Good game for me personally," Nimmo said. "I'm glad I was able to contribute."

Colorado has lost 10 of 13 and dropped to 18-42 away from Coors Field, the worst road record in the big leagues.

After winning Friday night on Pete Alonso's walk-off single, the Mets wasted little time getting on the scoreboard against Kyle Freeland (7-9). Nimmo sent Freeland's second pitch well over the right-center field wall to give New York an early lead. The 433-foot drive was Nimmo's sixth career leadoff homer, half of which have come against Colorado.

"If you start talking about the best leadoff hitters in baseball, his name has to be mentioned," Mets manager Buck Showalter said.

Nimmo doubled the lead one inning later. Freeland plunked Mark Canha to open the second - the 17th time the Mets' outfielder has been hit by a pitch this season. New York batters have been hit a major league-leading 87 times. Jeff McNeil worked a 10-pitch walk and, two batters later, Nimmo again connected on Freeland's second offering, driving it into right field for an RBI double.

"A little too much Nimmo," Rockies manager Bud Black said.

The two-run lead was more than enough for Peterson (7-3), who was making his second career start against his hometown Rockies. Peterson, recalled from Triple-A Syracuse before the game, scattered four singles and struck out seven in his best start of the season.

"He stayed in attack mode," Showalter said. "He was the key to the game."

The 26-year-old lefty set a career high for wins and has fanned seven or more batters in seven of his 16 starts this season. The Mets rank second in the majors with 1,207 strikeouts after recording 11 more Saturday.

"I take a lot of pride when I am given the ball," Peterson said.

Three relievers combined to complete New York's league-leading 17th shutout. Adam Ottavino worked the ninth for his second save this season - both in the past three days against his former team.

Freeland, who signed a five-year contract in April, allowed two runs on four hits over five innings. The 29-year-old left-hander walked one and hit two batters. He is tied for the major league lead with 15 hit batters.

Before the game, the Mets held their first Old-Timers' Day since 1994. To conclude the ceremonial portion of the event, the team retired Hall of Famer Willie Mays' No. 24. Mays played 135 games in two seasons with the Mets and hit his final 14 home runs for the team before retiring at the end of the 1973 season.

Rockies: Outfielders Charlie Blackmon, Sam Hilliard and Connor Joe were given the night off.

Mets: RHP Carlos Carrasco (left oblique) is scheduled to throw a simulated game Monday. . 3B Eduardo Escobar (left oblique) was activated from the 10-day injured list. He started and went 0 for 3.