Twins rally past Giants 3-2 on Celestino walk in 10th 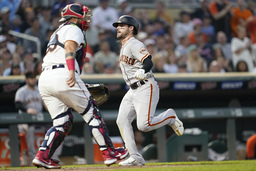 MINNEAPOLIS (AP) Gilberto Celestino walked with the bases loaded in the 10th inning and the Minnesota Twins rallied to beat the San Francisco Giants 3-2 Saturday night.

It was the second straight win for Minnesota, which had previously lost six in a row.

Minnesota scored all its runs in the final two innings.

Down to its last out, RBI singles by Carlos Correa and Jake Cave off San Francisco closer Camilo Doval tied the score 2-2 in the ninth.

Kepler walked to open the ninth and Luis Arraez walked two outs later. Correa singled to right to drive in Kepler and Miranda went the other way to score Arraez. Correa had a season-high four of Minnesota's nine hits.

With Jhoan Duran (2-3) pitching, a heads up play by Correa at shortstop opened the San Francisco 10th. With Luis Gonzalez trying for third base on a ground ball, Correa threw to Gio Urshela for an easy tag.

Correa started a near-rally in the eighth against John Brebbia, hitting a sharp single past third baseman Evan Longoria. Cave snapped an 0-for-21 skid with a single to get Correa to third, but Brebbia got Jose Miranda to pop out and Gordon struck out for the third time.

Doval replaced Brebbia and Urshela lined out. Minnesota was 2 for 10 with runners in scoring position.

Tommy La Stella drove in an early run for the Giants, who had just four hits for the second straight night. Three of those came in the ninth before Austin Slater's sacrifice fly scored another.

San Francisco starter Alex Cobb allowed four hits while striking out seven; however, he needed 99 pitches to get through his quintet of innings, 31 in the five-batter second inning.

After Zack Littell threw a 1-2-3 sixth, Alex Young survived a shaky seventh by, first, getting Celestino to hit into a double play. Two batters later and moments before a 51-minute rain delay, Arraez flew out with a man on second and lightning nearby.

Minnesota starter Sonny Gray also put up the outs in his five-inning outing without much brevity. Of his 90 pitches, 53 were strikes.

Gray took a no-hitter into his final inning but walked Slater and Gonzalez - Slater was picked off first base - before Joey Bart lined a double to left field for the first San Francisco hit. La Stella followed with a sacrifice fly to score Gonzalez.

Gray has allowed two or fewer runs in six of last seven starts since the All-Star break, going 3-1 in that span with a 1.91 ERA. He's struck out at least five in all but Saturday's game, where his total was four.

San Francisco recalled Gonzalez from Triple-A Sacramento after the Giants optioned OF Bryce Johnson to the River Cats after Friday's game.

Giants: 1B LaMonte Wade Jr. was back in the lineup. A late scratch Friday with hip tightness, he struck out three times.

Twins: 2B Jorge Polanco left the game in the sixth with left patellar tendinitis and is day to day. ... RHP Tyler Mahle (right shoulder tightness) felt good after throwing 25 pitches in a Friday bullpen session. A more intense bullpen session is planned next, although no time has been set. He is eligible to come off the 15-day disabled list Sept. 2.