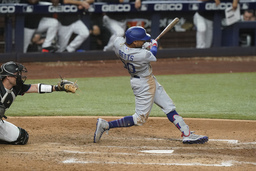 Freddie Freeman, Justin Turner and Trea Turner each had two hits and an RBI for the NL-West leading Dodgers, who are 27-7 since the All-Star break.

Automatic runner Chris Taylor advanced on Cody Bellinger's infield single in the 10th. Betts then hit a one-out line drive against Marlins reliever Andrew Nardi (0-1) that bounced off the warning track in left.

Trea Turner followed with an RBI single, Freeman hit a run-scoring double and Max Muncy capped the five-run outburst with a two-RBI double.

"It was resilient, we didn't play good defense tonight," said Dodgers manager Dave Roberts. "We gave them extra outs but ultimately we won a ball game."

Marlins rookie Peyton Burdick homered off David Price (2-0) to lead off the ninth and tie it at 5-all.

Betts' second blast, a game-tying solo shot off Miami against reliever Tanner Scott in the ninth, made it 4-4. It was the third multi-homer game of the season for Betts and 23rd in his career.

"It was pretty cool I guess," Betts said of his milestone. "A long time to play so we'll see what else I can do."

The Marlins took a 4-3 lead on Joey Wendle's infield single with the bases loaded in the seventh. Miguel Rojas' run-scoring bases loaded single tied it before Wendle reached on a short dribble near the first base foul line that scored JJ Bleday from third.

Betts hit a two-run shot in the top half that gave Los Angeles a 3-2 advantage. He drove reliever Dylan Floro's 2-2 pitch over the wall in left for his 28th homer.

"That's why he's one of the best players in the game," Roberts said of Betts. "It's fun to watch. What a great performance."

Betts, who also singled in the first, didn't want to accept the description of bailing out Los Angeles in the opener of the four-game series against Miami.

"I just want to win, it doesn't matter where we are in the standings," Betts said. "Each and every day I show up and want to win. So I just do everything I can to help the team."

Wendle's two-RBI double with the bases loaded in the sixth put the Marlins ahead 2-1 and chased Dodgers starter Tyler Anderson. The left-hander gave up two runs, three hits, walked two and struck out four in 5 1/3 innings.

The Dodgers stranded six runners through the first five innings before Taylor's sacrifice fly in the sixth broke up the scoreless tie.

Tommy Nance started and threw two scoreless innings of two-hit ball in the bullpen game for Miami. He walked two and struck out one.

Scott, who squandered his sixth save opportunity, allowed Freeman's two-out single before issuing walks to Will Smith and Muncy. Cole Sulser relieved Scott and surrendered Justin Turner's single to center.

"With Tanner, it's always the same, it seems," Marlins manager Don Mattingly said. "He walks the tightrope. He's always right on the edge. Today, he just didn't get out of it."

Miami designated veteran first baseman Jesus Aguilar for assignment. Aguilar"s playing time was drastically reduced the past four weeks. Aguilar, a 2018 NL All-Star while with Milwaukee, joined the Marlins in 2020 and helped lead the club to its first post-season appearance since winning the World Series in 2003. The native of Venezuela had a team-leading 15 home runs and 49 RBIs.

Dodgers: INF-OF Gavin Lux (neck issue) hit from the cage Friday and could start on Saturday. ... RHP Yency Almonte (right elbow soreness) played catch before the game but there is no timeline on his return.