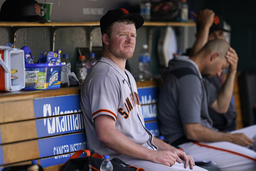 DETROIT (AP) Matt Manning threw six scoreless innings and the Detroit Tigers scored all six of their runs in the fifth to beat the San Francisco Giants 6-1 on Wednesday and split a two-game series.

"He escaped the issues early and really finished strong," Tigers manager A.J. Hinch said. "It's about as good a finish as you can have. It's just nice to see him walk off the mound with a lot of confidence."

Manning (1-1) allowed five hits, walked none and struck out a career-high eight, including his final three batters, in his first win since last Sept. 15 against Milwaukee.

"I think I just made pitches when I had to," Manning said. "I didn't come out of the gate super sharp but as the game went on, I had a good second inning, and then after that I was just trying to put some good at-bats together, make sure I didn't walk any people and try to get as many first-pitch strikes as I could."

"I think when Logan is ahead in the count he's getting more swings and misses," Giants manager Gabe Kapler said. "So there was some contact in that inning. Some of it was unfortunate, some of it was hard. I think if Logan could have that inning back, he'd probably get ahead of the bottom of the lineup."

Reyes' hit was the 300th of his career and extended his hitting streak to nine games. The ball took a tough hop on shortstop Brandon Crawford.

"It hopped up kind of higher than I thought it was going to so it kind of got my wrist, heel of the glove," Crawford said. "Obviously that was a turning point in the game so I wish I could have been able to make that play or get in front of it, knock it down and get an out somewhere."

Tommy La Stella drove in Mike Yastrzemski for the Giants' lone run in the seventh inning.

"Anytime you can get some things rolling against a guy like Webb, no matter how they come, you'll take them," Tigers catcher Tucker Barnhart said. "Big win for us, take it into the off day tomorrow."

Tigers: SS Javier Baez was a late scratch with back spasms. Clemens batted third in Baez's spot in the lineup but played second base. Willi Castro, originally in the lineup at second, moved to shortstop. ... RHP Michael Pineda (right tricep tightness) had a good rehab start Tuesday, allowing one run on three hits while striking out six in four innings. Hinch said Pineda will make a final rehab start on Sunday. ... RHP Jackson Jobe, the Tigers' first-round pick, third overall, in the 2021 draft, was scratched from his start with High-A West Michigan because he woke up with a sore back. He is expected to start over the weekend.