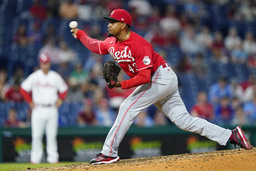 PHILADELPHIA (AP) Nick Maton's pinch-hit single with one out in the bottom of the ninth gave the Philadelphia Phillies a 7-6 victory over the Cincinnati Reds on Tuesday night.

Matt Vierling homered and J.T. Realmuto had a two-run triple for the Phillies, who have won the first two of their four-game series to help their NL wild-card chances. Philadelphia began play in second place in the wild-card race.

"It was a roller-coaster of a game, and it feels good to come out on top," Maton said.

TJ Friedl hit a two-run triple and Donovan Solano had two hits, including an RBI double, for the Reds.

"It was a great game," Reds manager David Bell said. "It's hard to say that when you lose. It would've been a great game to win. It didn't end up our way, and that's very disappointing for our team."

After the Phillies had given up two runs in the ninth to fall behind 6-5, Jean Segura led off the bottom of the ninth with a walk off Alexis Diaz (4-2). Pinch-hitter Bryson Stott followed with a drive to right-center that hit the top of the wall. Center fielder Nick Senzel overthrew two cutoff men, allowing Segura to score on Stott's double.

Diaz then struck out Vierling swinging before Maton, hitting for Edmundo Sosa, lined a 2-2 pitch to right field to score Stott.

"He's always ready to hit," Stott said. "To come through for us is awesome."

Maton was mobbed by his giddy teammates in short right field after a wild turn of events.

"We all believe in each other," Stott said. "If you don't do it, you have another great guy behind you who is very capable of doing it as well. We never feel like we're out of the game. With the hitters in this lineup, you know you're never out of it."

The Phillies might be getting their best hitter back real soon.

About 70 miles north of Philadelphia on Tuesday night, Bryce Harper hit a solo homer in his first at-bat and connected on a three-run shot in the eighth in his first rehab game at Triple-A Lehigh Valley. The 2021 NL MVP has been out since suffering a broken left thumb on June 25. Harper is eligible to return from the injured list on Thursday, but the Phillies said on Monday that he would likely remain in Lehigh Valley until Saturday and possibly rejoin the Phillies when they begin a three-game series at Arizona on Monday.

"Right now, I feel like we can beat any team in the game," Segura said.

Brad Hand (3-1) got the victory despite surrendering two unearned runs in the ninth.

After an out to start the top of the ninth, Senzel reached on shortstop Sosa's throwing error. Kyle Farmer's infield single to deep short put runners on first and second. After Alejo Lopez flied out, Friedl lined a two-run triple that just eluded diving center fielder Bradley Zimmer in deep right-center to put the Reds ahead 6-5.

Michael Plassmeyer pitched 1 ? scoreless innings of relief in a crucial spot in his big league debut for the Phillies. Plassmeyer, called up from Lehigh Valley prior to the game to help with the Phillies' injury-depleted bullpen, relieved starter Ranger Suarez with the bases loaded and two outs in the sixth and fanned Austin Romine on three pitches. He needed just six pitches to send the Reds down 1-2-3 in the seventh, finishing with eight strikes on nine pitches.

The 25-year-old Plassmeyer was selected in the fourth round by the Seattle Mariners in 2018. The Phillies acquired him in June in a trade with the San Francisco Giants, and the lefty was 4-2 with a 2.83 in 11 games - all starts - at Triple-A.

Reds starter Nick Lodolo didn't allow a hit through five innings but left after getting just one out in the sixth. He allowed three hits with five strikeouts and two walks.

Nick Castellanos extended his hitting streak to 13 games with the go-ahead RBI single in the sixth, and he is batting .364 during the stretch.

Reds: Mike Moustakas was removed from the game with a left calf injury after running the bases in the eighth after reaching third base. Bell predicted after the game that Moustakas wouldn't play on Wednesday but doesn't think the injury is serious. . INF Matt Reynolds (left hip pain) was placed on the 10-day IL retroactive to Monday. Reynolds left in the seventh inning of Sunday's 9-5 win at Pittsburgh due to hip soreness. . RHP Graham Ashcraft (right biceps soreness) was played on the 15-day IL retroactive to Saturday.

Phillies: Kyle Schwarber was back in left field for the first time since straining his right calf on Aug. 11. Schwarber had returned to the lineup as the DH on Friday. He went 0 for 4 with three strikeouts.

Reds RHP T.J. Zeuch (0-2, 13.50) will start for the injured Ashcraft in the the third contest of the four-game series against Philadelphia LHP Cristopher Sanchez (1-1, 3.80) on Wednesday night.