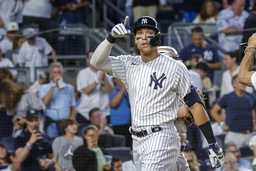 NEW YORK (AP) Tension had climbed around the Yankees heading into the Subway Series like the floors rising on a New York skyscraper. Aaron Judge and Andrew Benintendi gave them hope the big slump was over.

"We got a special group of individuals that are mentally tough enough to kind of bounce back after a couple of tough series and know, hey, it's a long season and we haven't been playing the type of ball we want to," Judge said after his major league-leading 47th home run sparked them to Monday night's 4-2 win over the Mets. "It's time to get back to what we do."

The Yankees, in a historic skid with 14 losses in 18 games coming into this matchup in the Bronx, built a 3-0 lead on DJ LeMahieu's first-inning sacrifice fly, Judge's third-inning home run off Scherzer (9-3) and fifth-inning doubles by Isiah Kiner-Falefa and Benintendi, who added an RBI single in the seventh.

They withstood a botched popup by rookie Oswaldo Cabrera and gained back-to-back wins for the first time since July 29-30, ensuring they ended a streak of six straight series losses, their worst since 1995.

Asked how many consecutive crisp games they need to ease their panicked fan base, manager Aaron Boone quipped: "4 1/2."

"At our core, we believe we're a really good team," Boone said. "And how many that is in a row that we've got to show that, I'll leave that up to you guys."

Domingo German (2-2) withstood James McCann's 104 mph liner off his left calf in in the sixth and was cruising with a three-hitter when Pete Alonso hit a seventh-inning popup that Cabrera and right fielder Marwin Gonzalez settled under just 221 feet from the plate.

Cabrera, making his first big league start at second after appearances at shortstop, third base and right, allowed the ball to pop out of his glove for an error as Gonzalez's leather hit his mitt, a play reminiscent of Luis Castillo's ninth-inning drop that turned the first Subway Series game at new Yankee Stadium in 2009.

Daniel Vogelbach, with 6-inch streaks of eye black across his face, followed two pitches later by driving a curveball into the Yankees bullpen in right-center for a two-run homer that made it 3-2.

Benintendi restored a two-run lead in the bottom half after Kiner-Falefa reached on an infield single and took second when shortstop Francisco Lindor made a barehand pickup of a bouncer and rushed a sidearm throw wide of first for an error.

Rookie Ron Marinaccio and Jonathan Loaisiga got four outs each, with Loaisiga earning his first save since Aug. 17 last year. That drew loud cheers from a season-high crowd of 48,760, the Yankees' ninth home sellout.

Judge, whose moved one ahead of Alonso with his 103rd RBI, said intensity rose because of the New York rivalry.

"The fans were bringing it," he said. "You could just feel a little different energy in the dugout."

Scherzer allowed four runs for the second straight start, raising his ERA from 1.93 to 2.33 in the two outings. He gave up seven hits in 6 2/3 innings.

Judge was 2 for 11 with seven strikeouts against Scherzer and in a 4-for-32 slump overall before lofting a 95.7 mph fastball for an opposite-field drive into the right-field seats.

"That's not what lost the ballgame. It's really the Benintendi at-bats," Scherzer said.

Jacob DeGrom had an issue while warming up before his last start and was pushed back from Tuesday. He will instead pitch against Colorado on Thursday or Friday.

Brandon Nimmo and Benintendi were hit by pitches leading off the first, the first time since April 17, 1926, the Yankees and their opponent opened with a hit batter. Washington's Alex Ferguson hit Mark Koenig and New York's Sad Sam Jones hit Sam Rice.

Anthony Rizzo took off from first, forcing a pickoff throw from Scherzer, after LeMahieu's sacrifice fly but was send back because umpires ruled the ball was still dead. The Mets then appealed at third, but umpires ruled Benintendi did not leave early and had scored to give the Yankees a 1-0 lead.

Mets LHP Nate Fisher was designated for assignment, a day after pitching three scoreless innings in his major league debut, a year after returning to the minors after a spell as a financial analyst at a Nebraska bank. The Mets also designated LHP Rob Zastryzny for assignment, optioned RHP Jose Butto to Triple-A Syracuse and selected the contract of RHP Connor Grey from the Triple-A farm team.

Mets: C Tomas Nido was activated from the IL He had been sidelined since Aug. 13 for an unspecified reason, which usually is COVID.

Yankees: DH Giancarlo Stanton, sidelined since July 23 because of left Achilles tendinitis, anticipates returning to the Yankees' lineup on Thursday when New York starts a trip at Oakland. ... RHP Scott Effross was placed on the 15-day IL, retroactive to Sunday, with a strained right shoulder. RHP Clarke Schmidt was recalled from Triple-A Scranton/Wilkes-Barre.

RHP Frankie Montas (4-10, 3.87) is 0-1 with a 9.00 ERA in three starts since the Yankees acquired him from Oakland. Mets RHP Taijuan Walker will pitch for the first time since Aug. 16 at Atlanta after overcoming back spasms.