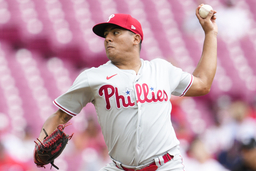 CINCINNATI (AP) Jose Barrero hit a game-ending RBI single off Seranthony Dominguez with two out in the ninth inning, and the Cincinnati Reds beat the Philadelphia Phillies 1-0 on Wednesday.

Albert Almora Jr. helped set up Barrero's winning hit with a one-out walk. Almora advanced to second when Alejo Lopez singled for his third hit, and then hustled home when Barrero hit a grounder back up the middle.

"I was fortunate enough to make contact," said Barrero, who had never faced Dominguez before. "All I wanted to do was help the team by making contact."

The 24-year-old Barrero has struck out 26 times in 48 big league at-bats this year.

It was the first run allowed by Dominguez (6-4) since July 10, snapping a string of 11 consecutive scoreless appearances.

"I was aggressive in the zone," Lodolo said. "I felt I got better as the game went on. I was working through traffic the first three innings but it got better."

Reds first baseman Joey Votto announced after the win that he will have season-ending surgery Friday to repair a torn left rotator cuff. The 38-year-old Votto, a six-time All-Star and 2010 NL MVP, hit just .205 this season with 11 homers and 41 RBIs.

"It's a big blow obviously. We're going to miss him a ton," manager David Bell said. "I have no idea how he was playing with it. I was lucky enough to talk to the doctors. They were very clear this has to be done now."

Lodolo got some help from right fielder Aristides Aquino, who made a terrific defensive play in the fifth. Aquino tracked down Alec Bohm's drive and then made a strong throw from the warning track to double up Rhys Hoskins at first.

"At that moment I was thinking just catch the ball," Aquino said. "When I caught the ball I saw the runner was off the base. I just threw it. When I'm playing defense, I always think I have a chance to catch the ball."

It was Aquino's ninth assist - the most by a Reds outfielder since Billy Hamilton had 12 in 2018.

Philadelphia won the first two games of the three-game series against lowly Cincinnati. But the Phillies wasted a stellar performance by Ranger Suarez in the finale.

The 26-year-old Suarez allowed three hits, struck out eight and walked two. The left-hander made his big league debut at Cincinnati on July 26, 2018.

Phillies: OF Brandon Marsh left Tuesday's 11-4 win when he crashed into the wall while trying to catch Jonathan India's home run. He had an MRI but there was no update on his condition.

Reds: RHP Art Warren (right upper arm) was activated from the 15-day injured list. RHP Buck Farmer was placed on the bereavement list. ... OF Nick Senzel (right hamstring) and INF Mike Moustakas (left calf strain) planned to work out before the game. Senzel was available to pinch-hit, but did not play. Moustakas is eligible to come off the IL on Friday.

Reds: Open a three-game series in Pittsburgh on Friday. RHP Graham Ashcraft (5-3, 3.96 ERA) is scheduled to start for the Reds.