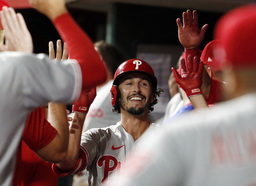 Philadelphia became the last of the original eight National League franchises to reach the mark. At 10,000-11,163, the Phillies are the only team among them with a losing record.

The New York Yankees are the lone American League team to top the five-figure win total.

"It was a great offfensive night. Home runs come in bunches. It has been too long for me," Hoskins said.

"Ten-thousandth win for the Phils. I'll take a part of history. That's a lot of wins. I know we have a lot of losses, too. I think I was a freshman in high school in 2007 when the Phils lost their 10,000th."

Nick Castellanos homered and doubled twice and scored three times. He has homered five times in his last six games.

Darick Hall and Garrett Stubbs also homered for the Phillies, who hold the second spot in the wild-card race. Kyle Gibson (8-5) struck out 11 in six innings in his third straight solid outing.

Hoskins three-run shot drive in the fourth put the Phillies ahead 5-3. He added his 26th home run with a runner on in the eighth.

TJ Zeuch (0-2), born and raised in nearby Mason, Ohio, allowed 11 hits, three of them homers, and six runs in four-plus innings. Cincinnati has lost six of seven.

"All the guys we have here are here for a reason. They earned the opportunity," he said. "We're with them all the way. We'll keep finding ways to get better."

Gibson faced the Reds for the first time in his 10-year career. He gave up three runs on six hits with no walks.

"I feel pretty good. I had a couple of rough starts in the middle of the season," said Gibson, who is from Greenfield, Indiana, less than a two-hour drive from Cincinnati.

"When the team puts up two runs you want to put up a zero. I'm my own worst critic. Everybody knows about Great American Ball Park. A lot have guys have benefitted from it. That's what makes baseball great. Not every field plays the same. Every now and then you have to make better pitches. It was fun playing in front of familty and friends," he said.

Hall and Castllanos hit back-to-back home runs in the third. It was the ninth for Hall and the 11th for Castellanos.

Jake Fraley and Jonathan India homered for the Reds.

Center fielder Brandon Marsh was injured trying to catch India's homer and limped off the field. Nick Maton, listed as an infielder, replaced Marsh with the only other outfielder on the roster, Kyle Schwarber out with a strained right calf. He is expected to return on Friday.

"It was one of those things where you're going for the ball. You just have to sacrifice the body a little bit," Marsh said. "I came down a little weird. I was pretty scared at first but I'm feeling better. We're going to let the team docs get a look and re-evaluate tomorrow. It was in the second row. I had a couple more feet to go."

The Phillies sent Marsh for an MRI.

"The doctor here thought it was a bone bruise. We're not bringing in another player. We're going to be status quo. It doesn't change anything for Schwarber unless he comes in tomorrow and tells me he's not feeling anything."

Maton could get time in the outfield.

Stubbs hit a three-run homer off Reds reliever Reiver Sanmartin in the ninth. It was challenged for fan interference but the call was confirmed.

Sanmartin could not finish the ninth. Infielder Alejo Lopez made his first career mound appearance and got the final two outs, getting Hoskins to hit into a force play. Lopez pitched one inning at Single-A Dayton.

Phillies: OF Bryce Harper (broken thumb) will resume batting practice before a rehab assignment around Aug. 24. ... RHP Corey Knebel's MRI revealed a lat strain. The team is following up with more testing to make sure there is no other damage.

Reds: INF Donovan Solano was placed on the paternity list. ... OF TJ Friedl was recalled from Triple-A Louisville. ... OF Nick Senzel ran the bases before the game and is expected to be in the lineup on Thursday, if all goes well. ... RHP Hunter Greene is on track to throw a bullpen on Sunday. Bell expects him to make a rehab start.