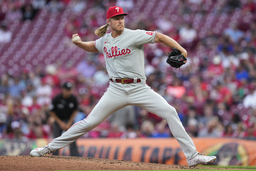 CINCINNATI (AP) Noah Syndergaard won for the second time in three starts since being traded to Philadelphia, and Edmundo Sosa drove in three runs as the Phillies beat the Cincinnati Reds 4-3 on Monday night.

Syndergaard (7-8) allowed three earned runs through seven innings. The 29-year-old right-hander was acquired from the Los Angeles Angels at the trade deadline.

"Good delivery, just attacking the zone, that's really it," Phillies interim manager Rob Thomson said. "His stuff keeps getting better. He gave up some hits, but he really limited the damage. Sosa made two tremendous plays."

Michael Papierski put the Reds ahead with a two-run single in the second, but Syndergaard allowed just three hits over the next five innings.

Syndergaard threw 24 first-pitch strikes to 28 batters with only 16 balls.

"A scout came to my house when I was 17 years old and asked me what the most important pitch in baseball is, not fastball, changeup, it's strike one," Syndergaard said. "That's something I take great pride in. I feel like I'm where I'm supposed to be at. I have a lot of confidence."

Sosa's two-run single highlighted a three-run third for the Phillies. He also had an RBI double in the fifth.

Those runs came as a relief for the Phillies, who scored one run while losing two of three to the Mets at Citi Field.

"The reality is the Mets have a pitching staff comparable to anyone in the league," Phillies right fielder Nick Castellanos said. "When pitching is good, hitting is really hard. (Tonight) reassured what we all know, how good of an offensive team we really are."

Jake Fraley led off the eighth with a solo homer, his fourth of the season, and Syndergaard was done after 77 pitches.

Seranthony Dominguez notched his ninth save in 10 chances with a 1-2-3 ninth.

Syndergaard owned a 2.11 career ERA against Cincinnati coming in, his lowest against any team he has faced at least five times.

"He got a lot of first pitch outs," Reds manager David Bell said. "It made it easier on him. He really pounded the strike zone. We hit some balls hard right at guys, but that's not taking anything away from him."

Castellanos who was an All-Star with the Reds last season, returned to Cincinnati for the first time since signing as a free agent with the Phillies in March. He went 1 for 5 with an RBI.

"I didn't have (a ceremony) when I went back to Detroit and I was there for six years," Castellanos said. "The fact that I'm getting one here after spending a year and 60 games here, it means a lot."

Phillies outfielder Bryce Harper posted an Instagram story of himself taking swings during a BP session at Citizens Bank Park on Monday, and interim manager Rob Thomson confirmed the 60-swing session went well. "I just texted him and he said he feels great," Thomson said.

It was the first time Harper has swung a bat since having his left thumb fractured by a Blake Snell pitch on June 25. Harper will have another batting practice session on Wednesday and hit off a high-speed pitching machine. There is no timetable for him to begin a rehab assignment.

Phillies: RHP Corey Knebel was placed on the 15-day IL with a right lat strain. Knebel injured himself throwing a pitch in the seventh inning on Sunday. He underwent an MRI on Monday to determine the extent of the injury.

Reds: 2B Jonathan India (left leg contusion) was scratched from the starting lineup after doing pregame work. ... OF Nick Senzel (hamstring tightness) could return to the lineup as early as Tuesday.