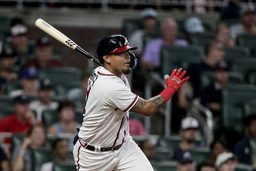 The victory was Atlanta's second straight and boosted the defending World Series champion Braves to 38-14 since June 1, the best record in the major leagues over that span. Atlanta stayed three games behind the New York Mets in the NL East.

Contreras, the Braves' No. 2 catcher, thought Anderson's performance was stellar. The two know each other well from spending time in the Braves' farm system, and Contreras was pleased to see Anderson having all his pitches working.

"We have a good connection between the two of us," Contreras said through a translator. "He had everything going tonight - fastball, change, curve. I'm really happy for him. He had a tremendous game, and I'm happy to see him have that kind of a performance out there."

The Braves improved to 17-8 this month to guarantee consecutive months with single-digit losses for the first time since the 2004 team won the division with 96 victories. They are 35-21 at home.

Matt Olson, who has gone deep nine times in his last 18 games, made it 1-0 in the first with his 21st homer, a 415-foot shot into left-center. Olson matched his career-best 25th RBI for a month from September 2021.

Eddie Rosario began the second with a walk and crossed the plate when Contreras connected with a 427-foot shot to center field. Contreras homered into right in the fourth to pad the lead at 4-0. It marked the All-Star's third career multihomer game and first since May 21 at Miami.

Contreras likes the role he's carved out with the Braves, backing up Travis d'Arnaud and occasionally serving as designated hitter.

"I'm just going to keep taking advantage of the opportunity to play," Contreras said. "If they put me in the lineup, that's all I want. I'll play any position they ask me to play. Obviously, I like catching and it's something I look forward to and sure I prefer it, but they could put me at any position and I'd be happy."

"I felt like he was primed and ready to show us what he could do, but he just didn't execute," Arizona manager Torey Lovullo said. "Those are things we have to coach up and get into him a little bit and get him into the right spots. It's a learning process for young pitchers, and I know there's more in there for him, so he shows glimpses of good stuff. He just lacks consistency."

Atlanta scored twice to make it 6-0 in the sixth on Rosario's RBI triple and Orlando Arcia's RBI single.

Anderson (9-6), trying to quell speculation that he's in danger of losing his spot in the rotation, retired the first 14 batters he faced and finished with one walk and nine strikeouts. He had a 6.25 ERA with a .303 opponents' batting average in his 12 previous starts.

Anderson said he didn't feel any added pressure heading into his start.

"I think that's why I went into it with a mentality of whatever happens happens," he said. "I'm going to do whatever I can to make sure it happens in my favor, but with the support I've had - everyone has wanted to help me a ton, and I just want to help the team win games at this point. We're in a good spot."

Anderson gave up his first hit when Jake McCarthy doubled with two outs in the fifth. McCarthy stole third and Anderson walked Buddy Kennedy before Geraldo Perdomo struck out to end the threat. Anderson lowered his ERA to 4.99.

The Diamondbacks dropped to 45-55. They began the day 22 games out of first place in the NL West. Arizona scored twice off A.J. Minter in the ninth on Daulton Varsho's RBI single and Jake McCarthy's RBI single.

Braves closer Kenley Jansen left Friday's win with a sore back, and manager Brian Snitker said he would not be available out of the bullpen. Snitker hopes Jansen will be able to return Sunday.

With OF-DH David Peralta dealt to Tampa Bay before the game, Diamondbacks manager Torey Lovullo inserted Buddy Kennedy at 2B and used Ketel Marte at DH. Peralta, 34, played the third-most games in Arizona history and spent his entire nine-year career with Arizona. He won a Silver Slugger award in 2018 and a Gold Glove in 2019. The Rays sent 19-year-old minor league catcher Christian Cerda to the Diamondbacks.

"Sad news for me, but I'm excited to join a team that I can help go to the postseason," Peralta said. "I never thought this day was going to come, but it happens. I was prepared for something to happen."

Joe Torre, Leo Mazzone and the late Joe Adcock were inducted into the Braves Hall of Fame as the team hosted its alumni weekend. An on-field ceremony was held before the game.

Torre, a National Baseball Hall of Fame manager with the Mets, Braves, Cardinals, Yankees and Dodgers, went 257-229 from 1982-84 as Atlanta manager. He spent nine of his 18 major league as a catcher and first baseman with the Braves, hitting .294 with 142 homers and 552 RBIs and going to the All-Star Game five times with Milwaukee and Atlanta.

Mazzone was the pitching coach in Atlanta from 1990-2005, during which the Braves won 14 consecutive division titles. National Baseball Hall of Fame pitchers Greg Maddux, Tom Glavine and John Smoltz enjoyed their best seasons under Mazzone.