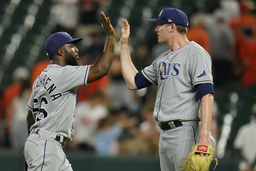 BALTIMORE (AP) Randy Arozarena hit a two-run double off All-Star reliever Jorge Lopez in the 10th inning, and the Tampa Bay Rays recovered from another late lapse to beat the Baltimore Orioles 6-4 Wednesday night and end a four-game losing streak.

Baltimore's Jorge Mateo sent the game into extra innings with a one-out solo shot in the ninth off Colin Poche (3-1). One night earlier, Poche entered in the eighth inning with a one-run lead and yielded a two-run homer.

"I didn't even think twice about putting him in the ballgame," Tampa Bay manager Kevin Cash said.

The result, unfortunately for the Rays, was strikingly similar.

"You feel for Colin a little bit," Cash said. "I saw on the highlights that the ball was up where he wants it. Mateo just did a good job of getting to it and knocking it out of the park."

This time, however, Tampa Bay rebounded from Poche's mistake.

An infield hit and a walk loaded the bases for Arozarena, who ripped a pitch from Lopez (4-6) to the base of the right-field wall.

"Really impressive by Randy," Cash said. "He plays well in this ballpark and picked us up."

Pete Fairbanks got three straight outs in the bottom half for his first save.

Ji-Man Choi and Luke Raley homered for the Rays, who totaled just nine runs during their four-game skid. Tampa Bay is 43-11 when scoring at least four runs and 10-34 when held to three runs or fewer.

Baltimore fell to 14-7 in July and missed a chance to move two games over .500 this late in the season for the first time since 2017.

Orioles starter Tyler Wells got one out in the fifth inning before leaving with lower back discomfort. The right-hander allowed four runs and six hits in losing his third straight start.

"He's got some side and lower back discomfort," manager Brandon Hyde said. "He's going to get re-checked (Wednesday)."

Hyde conceded "there's a pretty good chance" that Wells will land on the injured list.

"It's unfortunate. I'm hoping for the best," Hyde said.

Wells leads Baltimore in wins, ranks second in innings pitched and is tied for the team lead with 20 starts.

Rays right-hander Drew Rasmussen started on his 27th birthday and had little to celebrate. He hit two batters, walked one, let in a run with a wild pitch and was pulled with two outs in the fifth inning, making him ineligible to get the win with Tampa Bay up 4-3.

Jackson Holliday, the No. 1 overall pick in the 2022 amateur draft, took batting practice with the Orioles before the game after signing a contract with an $8.19 million signing bonus and meeting with the Baltimore media.

His professional career will begin this week in Florida, where he will work out at the team's training complex in Sarasota.

Holliday, an 18-year-old shortstop, is the son of former All-Star outfielder Matt Holliday.

Orioles: LHP John Means won't pitch again this year after undergoing Tommy John surgery in late April, but he appears on track for a successful return in 2022. "He's on schedule and feels great," Hyde said. "It's great to see him keep his head up throughout this."