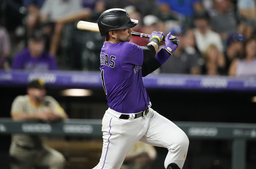 DENVER (AP) Jose Iglesias drove in a career-high six runs with a homer and two singles, and the Colorado Rockies continued their home domination of San Diego with a 10-6 win over the Padres on Wednesday night.

Colorado has won 12 of its last 13 against San Diego at Coors Field since the start of the 2021 season.

Sam Hilliard had three hits and scored three runs and Robert Stephenson (1-1) got the win with an inning of relief for the Rockies, who saw manager Bud Black ejected in the sixth inning.

Iglesias had an RBI single in the Rockies' three-run fifth, a three-run homer in the sixth and drove in two more with a single in the seventh when Colorado took the lead of reliever Tayler Scott (0-1).

According to the Rockies, Iglesias became the third shortstop in franchise history to record six RBIs in a game, joining Troy Tulowitzki and Trevor Story.

"The early Iglesias was known for the slick fielding, good hands, had a flair on his defense - and now looking at his career has been pretty good hitter," Black said. "He's been a pretty good hitter for average with a little bit of pop in there."

It continued a big week for the shortstop, who doubled Monday to become the 19th Cuban born player to collect 1,000 hits in the majors.

"We have very, very good talent on this team and I'm very happy to be part of it," Iglesias said.

Before Iglesias' homer, the Rockies nearly ran themselves out of a rally. With no outs, Garrett Hampson grounded to first baseman Eric Hosmer and Elias Diaz broke for home from third base. Hosmer threw to catcher Austin Nola, who turned to tag Diaz but Diaz ran around the attempt as Nola dropped the ball.

Home plate umpire Jerry Meals ruled Diaz out for running outside the baseline and Black was ejected for arguing the call with Meals.

"I didn't have the benefit of replay to watch that and so when I came inside, I saw that he didn't really secure the ball," Black said. "When he made the tag, the ball was well away from him. So that didn't make sense. The umpire made a call and stood by it. And I disagree."

Jake Cronenworth's ninth homer of the season and a two-run fifth off starter Chad Kuhl helped the Padres build a 3-0 lead for Joe Musgrove. He was tagged for three runs in the fifth, but San Diego went back in front 6-3 with a big sixth inning.

The Padres scored five of their six runs with two outs. Kuhl got the first two batters in the fifth before four walks and a single brought home two. In the sixth, a double, single and two walks produced three more runs after there were two outs.

Padres: Manager Bob Melvin said RHP Nick Martinez is fine after leaving Tuesday's game due to a mild ankle sprain suffered while trying to avoid a line drive. ... OF Jurickson Profar (concussion) is going through baseball activities in San Diego. "It's going to be about passing the concussion protocol stuff," Melvin said. ... OF Wil Myers (right thumb contusion) is on a rehab assignment and is improving.

Rockies: 1B C.J. Cron (wrist) had a pinch-hit single and scored a run in the seventh. He stayed in the game and played first base. ... RHP Alex Colome suffered a slight strain at the top of his right hamstring in Tuesday's game, Black said. ... OF Kris Bryant is expected to return from the paternity list Thursday. ... RHP Antonio Senzatela (right shoulder inflammation) went five innings in a rehab start Tuesday night and may return to the rotation before the All-Star break.