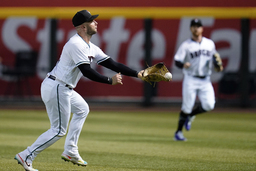 Iglesias led off the ninth inning with a sharp single to left against Mark Melancon (3-7). Grichuk's drive into the gap was missed by diving center fielder Alek Thomas. Iglesias just beat the throw home.

"I felt like I was seeing the ball well," Grichuk said, adding that he was expecting Melancon to throw a breaking ball, but never got one. "That ball was in, with two strikes I'm able to shoot it the other way."

Carlos Estevez (2-4) pitched a scoreless eighth for Colorado, striking out pinch-hitter Thomas with two out and two on. Daniel Bard pitched the ninth for his 17th save.

The Rockies (36-47) were just swept in Los Angeles by the Dodgers, but were competitive in the series.

"We've been playing good, hard baseball," Rockies manager Bud Black said. "The Dodgers got a couple big hits against us, tonight we got the big hits. It comes down to a couple plays."

The Diamondbacks (38-45) lost in the ninth inning for the second straight day after being tied after eight innings. They lost to the Giants 7-5 on Wednesday.

"I felt like we had some opportunities," manager Torey Lovullo said. "We got to find a way to make good things happen. We're all a little bit frustrated."

Carson Kelly drove in all three Arizona runs with a two-run homer in the second inning and a two-out single in the fourth.

Colorado picked up two runs in the first against Dallas Keuchel. Connor Joe and Kris Bryant led off with doubles, and Bryant scored on Brendan Rodgers' single. Grichuk's double down the right field line with two outs in the fourth was followed by Ryan McMahon's sharp single to right, and Grichuk barely beat Jordan Luplow's throw home for the Rockies' third run.

Keuchel, in his third start for Arizona since being claimed on waivers from the Chicago White Sox, pitched seven innings, giving up seven hits. He struck out four and didn't walk a batter.

Colorado played its 12th straight game without an error, one short of the franchise record set in 1998. The Rockies still lead the major leagues in errors with 59. ... The Rockies won for just the 13th time on the road this season and had lost nine of their last 10 away from Coors Field. They are 13-26 (.333) overall, the majors' worst road record.

The Diamondbacks brought Sergio Alcantara back for the second time this season, activating him on Thursday. Alcantara, claimed on waivers on Tuesday, was designated for assignment by San Diego last week after batting .114 in 22 games. The Padres picked him up after the Diamondbacks waived him in May.

Lovullo said before the game that the Diamondbacks wanted to keep Alcantara - he played 23 games with Arizona and batted .189 - but that they had a roster decision when they activated SS Nick Ahmed, who subsequently underwent shoulder surgery and is unlikely to return this season.

Alcantara, who turns 26 on Sunday, is a switch-hitter who will play short, second and third, and appeared in Thursday's game as a pinch-runner and remained in to play second base. Lovullo said his ability to spell Geraldo Perdomo at short was a factor in the decision. Alcantara has played for Detroit and the Chicago Cubs since his debut in 2020.

To make room, Arizona optioned IF Jake Hager to Triple-A Reno. The Diamondbacks also outrighted IF Cole Tucker to Reno.