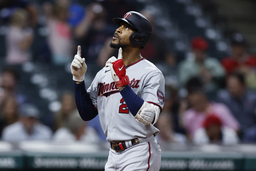 CLEVELAND (AP) Jorge Polanco didn't take long to get back into the swing of things.

Returning from his first stint on the injured list as a major leaguer, Polanco drove in three runs and rookie Josh Winder pitched six stellar innings as the Minnesota Twins earned a day-night doubleheader split with a 6-0 win over the Cleveland Guardians on Tuesday night.

Amed Rosario's clutch two-run single in the eighth inning rallied Cleveland to a 3-2 win in the opener, snapping the Guardians' five-game losing streak.

Polanco, who missed 14 games with lower back tightness, was reinstated from the IL and quickly made a difference by cracking a two-run homer in the third inning off rookie Konnor Pilkington (1-1) as the Twins restored their lead in the AL Central to three games over the Guardians.

"We talk about a lot of the things that Polo brings to the table," Twins manager Rocco Baldelli said of the steady second baseman. "One, he's just a really good player. He's a good hitter and he's a good hitter from both sides of the plate. That brings a lot to the table all by itself."

Byron Buxton hit his 20th homer and Jose Miranda connected in the second game for the Twins, who have taken two of three in this five-game set between division rivals.

Winder (3-2) was brought up as the club's 27th man for the doubleheader and excelled in just his fourth major league start - and first since May 27. The right-hander allowed four hits and one walk - to start the first.

It's been an up-and-down few months for Winder. He's started, pitched in relief, been on the injured list (shoulder impingement) and down in the minors. But he's healthy now and giving the Twins another weapon.

"It's definitely been a whirlwind, but I've been able to focus on getting back and I was able to do that tonight," said Winder, who knows he'll soon be back in the minors. "I'm not going to let that affect my preparation. I'm going to go out there and be ready whenever my name is called."

Tyler Duffy (one inning) and Jovani Moran (two) completed the combined five-hit shutout- the second time Minnesota has blanked Cleveland in a week.

Polanco's eighth homer gave the Twins a 3-0 lead in the third, and helped them shake off a tough loss in the opener.

"Our guys are good at being forgetful," Baldelli said. "It's the nature of our game. No matter what happens in a given game, one of the greatest assets our guys have is they are able to wipe it away pretty easily.

Carols Correa walked with two down and Luis Arraez, who entered the day leading the AL with a .342 average, ripped a triple into the right-field corner to make it 1-0. Polanco followed by lifting a 1-1 pitch over the 19-foot-high wall in left.

Cleveland's defense prevented the Twins from tacking on more runs in the fourth, when Ryan Jeffers was thrown out at second trying to stretch a single and Miranda got caught off third after a failed safety squeeze.

Polanco, though, made it 4-0 in the fifth when he avoided a double play by legged out a grounder.

"He busted his tail down the line," Baldelli said. "That's winning baseball and he's a winning player."

Miranda's fifth homer made it 5-0 in the sixth.

Down 2-1 in the opener, the Guardians came back against reliever Emilio Pagan (1-3), who walked Myles Straw and rookie Steven Kwan before facing Rosario.

Cleveland's shortstop then slapped a 3-2 pitch through the middle to give the Guardians a major lift. When he rounded first, Rosario, who went 3 for 4 and has five three-hit games in June, skipped in the air.

Buxton's 427-foot homer gave him a new career-high for a season, surpassing his 19 last season.

Baldelli has been resting his best all-around player to keep him heathy, and the plan seems to be working.

Looking to save his bullpen for the doubleheader, Guardians manager Terry Francona used utilityman Ernie Clement to pitch the ninth in Monday's 11-1 blowout loss. Clement gave up two runs but got an inning-ending double play.

Francona had a similar experience, pitching as a position player for Milwaukee against Oakland in 1989.

"If you look, we had one strikeout as a staff that day," he said with a smile. "It was me. Struck out Stan Javier. Then it kind of got me going. Went up to Seattle the next day and hit a home run. For about the next month kind of swung the bat a little better. It was kind of fun."

Twins: OF Trevor Larnach (core muscle strain) had successful surgery in Philadelphia. The 25-year-old had been bothered by increasing pain and opted for the operation. He's expected to resume baseball activities in six weeks.