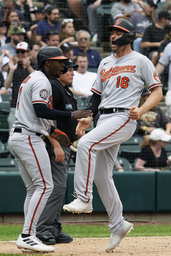 Lance Lynn (1-1) retired eight straight batters before Mateo lifted a solo homer just over the left-center fence to put Baltimore ahead in the third.

Baltimore coughed up its advantage on two errors in the bottom of the inning, but Mateo struck back by belting his 10th double off the left field wall. He scored to make it 2-1 on the next at-bat, when Leury Garcia erred on Cedric Mullins' infield grounder.

Spenser Watkins (1-1) gave up five hits and no earned runs to get his third win in 19 career starts. He fanned four and walked one in five innings.

"Love the way he kept guys off balance, love the way he threw a bunch of strikes," Orioles manager Brandon Hyde said. "The cutter was good, threw some good curveballs and mixed (pitches) extremely well."

Watkins was feeling good physically after coming right up on his pitch limit, recording 49 strikes on 78 pitches.

"Very pleased to be able to give the team a chance to win, especially with the momentum they've already carried into this series and so far in the series," Watkins said.

Mateo snagged a line drive to deny Sosa his first big-league hit in the fifth.

Bryan Baker, Nick Vespi and Dillon Tate combined to allow one hit and a run in four innings.

"It's really fun kind of getting on this little roll," Baker said. "Hopefully we can continue this throughout the road trip and keep the momentum rolling."

"We come to the park every day and expect to win," first baseman Trey Mancini said. "That's not a feeling we've had here in a long time."

Even for the AL East cellar-dwellers, a few victories can make a crucial difference in clubhouse morale. The Orioles are now 23-8 when scoring five or more runs.

"It's been a while since we've really been close to .500, not that it's the goal or any sort of ultimate goal by any means," Mancini said.

Chicago has lost four in a row at home.

Lynn's day ended in the seventh after he walked Mateo, hit Robinson Chirinos and Trey Mancini with pitches, and Cedric Mullins singled. The 35-year-old allowed six hits and two earned runs in 6 2/3 innings, striking out eight and walking one.

Boos rang out from the Guaranteed Rate Field stands when Ruiz escaped the frame without more damage.

Chicago pulled a run back in the ninth as Seby Zavala drove in Gavin Sheets on a groundout.

Baltimore: IF Rylan Bannon and RHP Marcos Diplan were each optioned to Triple-A Norfolk on Saturday. Diplan has allowed four hits and one earned run in 5.2 innings this season. .. IF Jonathan Arauz made his Orioles debut and Watkins made his first start since May 22 after the Orioles recalled them from Norfolk.

Chicago: SS Tim Anderson had Saturday off as the White Sox continue to limit his workload since his return from a groin injury on Monday. Anderson, 1B Jose Abreu, OF Luis Robert, DH Andrew Vaughn and OF AJ Pollock currently have instructions to "slow it down" on routine base running plays, according to La Russa. ... C Yasmani Grandal (lower back spasms) is nearing a return from a right knee sprain. ... OF Eloy Jimenez started as Triple-A Charlotte's designated hitter on Saturday as he rehabilitates from a right hamstring strain.