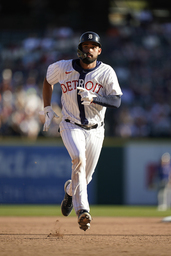 DETROIT (AP) Eric Haase had three hits, including one of three Detroit homers, and the Tigers snapped a six-game losing streak with a 14-7 win over the Texas Rangers on Saturday.

The Tigers had scored only two runs in their last four games, but set a season high for runs Saturday.

"I don't know if we had a sense this was coming, but we knew we needed to go out and do it," Tigers manager A.J. Hinch said. "Today was every guy in the lineup stepping up, and I'm thankful, because they needed it. Everyone on this team needed a game like this."

"I'm feeling awesome - it has been a busy couple days, but I just wanted to get to playing baseball," said Greene, who went 2 for 3 with two walks. "Once I got that first hit out of the way, all my nerves were gone. Now we go."

"It was just a lot of balls down the middle," Rangers manager Chris Woodward said. "A major league starter has to go out there and be able to execute pitches. That lineup obviously hasn't been scoring a ton, and if you execute against them, you can get them out.

Adolis Garcia gave the Rangers a 1-0 lead with a first-inning homer before the Tigers scored three runs in the bottom of the inning.

With one out, Grossman hit his first homer of the season. Miguel Cabrera flew out before Haase doubled and scored on Baez's fourth homer. Greene followed with a single in his first big league at-bat.

"We gave up the quick run, but we came right back with Robbie hitting his first one, and then Javy hits one," Hinch said. "This has been a tough week, and after Garcia hit one a mile in the first inning, it was huge to have that kind of inning."

The Tigers added a fourth run in the second on a run-scoring double play, then made it 6-1 in the fourth on RBI singles by Willi Castro and Cabrera.

Jesus Tinoco replaced Hearn and immediately gave up a three-run homer to Haase.

Kody Clemens made it 10-1 in the fifth, picking up his first career RBI with a sacrifice fly that was also Greene's first run. Castro added an RBI triple later in the inning.

Leody Tavares doubled and took third when Baez couldn't handle a line drive by Zach Reks. Marcus Semien hit into a double play, making it 11-2. Corey Seager followed with a homer and Adolis Garcia tripled and scored on Baez's second error of the inning.

That pulled Texas within 11-4, but Detroit scored three times off Jose Leclerc in the bottom of the inning. Leclerc was pitching for the first time since July 26, 2020 after undergoing Tommy John surgery.

"It was a good day just to see Jose out there wearing our uniform," Woodward said. "The results aren't what he wanted, but he's back pitching in the majors. That's the biggest step."

The Rangers scored three runs against Jason Foley in the ninth.

The Tigers played in Detroit Stars throwbacks as part of their annual Negro Leagues Weekend. The Rangers wore their normal blue tops and gray pants rather than a themed uniform.