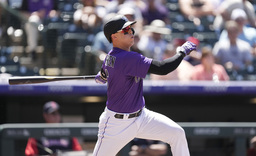 DENVER (AP) Jose Ramirez doubled for his eighth straight game with an extra-base hit and the Cleveland Guardians matched a season high with their fourth win in a row, beating the sloppy Colorado Rockies 4-2.

Ramirez hit an opposite-field grounder that hugged the third-base line against an exaggerated shift in the first inning. He is the first major leaguer with extra-base hits in eight consecutive games since Cincinnati's Joey Votto in 2020.

"We come out of here feeling good, but there was some closeness to every game," Cleveland manager Terry Francona said. "It's not always perfect, but they keep plugging. They keep trying to pick each other up. It makes for a fun dugout."

Amed Rosario extended his hitting streak to 10 games with an RBI single to cap a three-run third inning for a 3-0 lead. He is 18 for 42 (.429) during his hitting string and was 6 for 13 with three extra-base hits in the series at Coors Field.

Triston McKenzie (4-5) gave up one run in six innings. He worked around seven hits, striking out six and walking one. He gave up two hits in each of the first two innings but did not allow a run, striking out three.

Emmnauel Clase earned saves in all three games, and each one ended with a double-play grounder. He used a slider to get Brendan Rodgers to hit into a double play with runners on first and third to finish the series.

"The key is to execute those uncomfortable pitches and also be confident that you can execute those pitches," Clase, who has 14 saves, said through an interpreter. "I know my stuff. I know the stuff that can get that pitch when the situation allows."

Said McKenzie: "After the two (game-ending double plays), I was like, oh, please, we need a third just to make it a clean sweep."

Brian Serven, who tripled, and Connor Joe each had a career-high four hits for Colorado, which has lost 10 of 14. Colorado had 11 hits but was 1 for 9 with runners in scoring position.

Joe singled in Severn to make it 3-1 in the fifth. But the Rockies could only get C.J. Cron's sacrifice fly after loading the bases with no outs in the seventh.

"They are getting paid a lot of money to make good pitches, and they did that," Serven said. "They made good pitches when they had to. It was a tough one."

The Rockies committed two errors leading to unearned runs in the second and seventh innings and have at least one error in their last 13 home games, the longest streak in franchise history. Colorado has made a major league-high 54 errors.

Once and current Denver Broncos quarterbacks Peyton Manning and Russell Wilson took batting practice before the game while filming a segment of "Peyton's Places" for ESPN+.

Wilson, who was selected by the Rockies in the fourth round of 2010 draft and played two seasons in their minor league system, hit several balls over the left field fence.

"It's a real swing," Colorado manager Bud Black said. "It's a real athlete. Many scouts thought he was headed to be in the major leagues."

The pair have been picked to 23 Pro Bowls, 14 for Manning.

BRYANT HITS ON THE FIELD

Colorado outfielder Kris Bryant hit off a pitching machine during an extended batting practice session before the game, his third hitting session this week.

"He's getting very close to a rehab assignment . closer than you think," Black said.

Bryant was placed on the injured list for the second time this season May 25 after previously missing 3 1/2 weeks with the back issue. This rehab assignment likely will be longer than his first, which lasted two days, Black said.

Bryant is hitting .270 with no homers and four RBIs in 17 games after signing a seven-year, $164 million free agent deal March 18.

Guardians: DH/OF Franmil Reyes (hamstring) was 3 for 4 with a two-run homer as the DH at Triple-A Columbus on Thursday in the second game of his rehab assignment. Reyes could play the outfield this weekend at Columbus, Guardians manager Terry Francona said. . After throwing 76 pitches in a rehab game at Columbus on Wednesday, RHP Aaron Civale (glute) is on track to rejoin the team during the three-game series in Minnesota beginning Tuesday. ... LHP Konnor Pilkington was optioned to Columbus after starting Wednesday.

Rockies: INF/OF Garrett Hampson was scratched from the starting lineup after being placed in the COVID-19 protocol following a morning test. "A couple of years ago, we shut down games," Black said. "I think we are figuring out how to stay as safe as possible." . INF/OF Sean Bouchard was recalled from Triple-A Albuquerque to fill the roster spot.

Guardians: RHP Zach Plesac (2-4, 4.70 ERA) is to face Dodgers LHP Clayton Kershaw (4-1, 2.12) on Friday in the opener of a three-game series to conclude the Guardians' six-game interleague road trip.