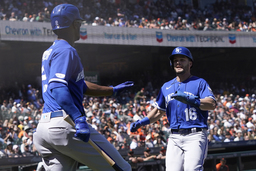 SAN FRANCISCO (AP) Whit Merrifield broke a 2-2 tie with an eighth-inning sacrifice fly and the Kansas City Royals edged the San Francisco Giants 3-2 on Wednesday to avoid a three-game sweep.

Andrew Benintendi led off the inning with a pinch-hit double off Giants reliever John Brebbia. Nicky Lopez moved him to third on a sacrifice bunt and Merrifield brought him home.

"That's kind of how you'd want to draw up an inning like that," Benintendi said. "Nicky laid down a great bunt and Whit got the job done with the sac fly."

Kansas City jumped ahead in the first inning when San Francisco shortstop Brandon Crawford, a four-time Gold Glove winner, made a rare fielding error on a slow chopper by MJ Melendez, allowing two runs to score.

"(Crawford) is such an excellent defender most of the time," Giants manager Gabe Kapler said. "I think that ball just kind of jumped up on him a little bit. It's part of the game. It happens. It's human error."

Belt answered with a solo home run to right-center in the fourth, his fifth of the season and first since April 20. Curt Casali tied the game at 2 with a sacrifice fly later in the fourth.

Jose Cuas (1-0) entered with one out in the seventh and retired three batters to earn his first career victory. The 27-year-old converted infielder had toiled in the minors for six years before making his big-league debut earlier this season.

"It's amazing," Cuas said. "It's more than I've ever dreamed of. I can't really tell you I've dreamed of this moment because I didn't get this far in my dream. But it's amazing. I'm soaking every second of it I can and every day for me is just a dream come true."

Scott Barlow recorded the last five outs for his seventh save in eight opportunities as Kansas City snapped a four-game losing streak.

Brebbia (3-1) suffered his first loss since July 18, 2021 as the Giants finished their longest homestand of the season at 6-3.

San Francisco went 0 for 7 with runners in scoring position and left nine men on base.

Crawford played in his 1,500th game, all with the Giants. The Bay Area native became the fifth player in the San Francisco era to play at least 1,500 games with the Giants, joining Willie McCovey, Willie Mays, Barry Bonds and Jim Davenport.

"It's a pretty short list and those are great players," Crawford said. "So definitely really cool to be on that list with them."

Crawford finished 1 for 4 with a single.

Royals: RHP Zack Greinke (right flexor strain) is nearing a return from the injured list after an impressive rehab start Sunday at Triple-A Omaha. Greinke threw 49 pitches in five scoreless innings. He might need one more rehab appearance to stretch out his pitch count.

Giants: OF LaMonte Wade Jr. (left knee inflammation) threw on the field before the game. Kapler is optimistic he can begin a rehab assignment this weekend. ... Casali returned to the lineup after missing three games with a hamstring injury.

Royals: Open a three-game series at Oakland on Friday. The Royals will play six of their next nine games against the Athletics.

Giants: Travel to Pittsburgh to begin a seven-game trip on Friday.