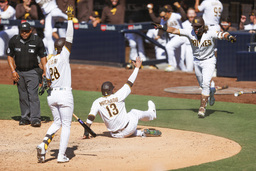 SAN DIEGO (AP) Automatic runner Manny Machado hustled home when a two-out wild pitch in the 10th inning led to a throwing error by catcher Elias Diaz, lifting the San Diego Padres over the Colorado Rockies 2-1 Saturday in the first game of a doubleheader.

"Ball in the dirt, you take a chance," Padres manager Bob Melvin said. "Just another aggressive play by Manny, who helps us wins games in so many different ways."

Machado began the 10th at second base and stayed there as Carlos Estevez (1-4) retired the first two batters.

Estevez then bounced a breaking ball and Machado took off for third. Diaz's throw went wild, and Machado raced home ahead of the throw to the plate by left fielder Yonathan Daza.

"Talk about finding a way (to win)," Melvin said. "That is one we had not worked on."

About 40 minutes before the second game, the Padres announced that Melvin and bench coach Ryan Christenson entered COVID-19 protocols and that quality control coach Ryan Flaherty would manage.

The Padres have won seven of eight and improved to 37-22, the best start in franchise history through 59 games.

Colorado has lost seven of nine.

"Wilson, after last night seemed like he kind of found his breaking ball again and has some ability for some strikeouts," Melvin said. "That is going to be big for his confidence."

Padres starter Nick Martinez allowed one run and five hits through 5 2/3 innings. He filled in for Mike Clevinger, who was put on the COVID-19-related injured list.

"At times maybe he pitches around the zone and then it forces him to throw in the zone," Melvin said of Martinez. "He is finding out that his stuff is good enough to pitch in the zone all of the time."

Trent Grisham hit a solo homer in the Padres third. He connected against Ryan Feltner, who lasted six innings, giving up two hits and while striking out six.

Martinez threw shutout ball until the sixth, when the Rockies scored a run to make it 1-all. Charlie Blackmon reached first on a wild pitch while striking out and Brendan Rodgers hit an RBI double.

"The fastball was really good, my off-speed was good when I needed it," Martinez said. "I want to attack every hitter with all of my pitches."

Padres: Clevinger and LHP Adrian Morejon were put on the COVID list. San Diego brought up two relievers from Triple-A El Paso to take their place - LHP Ray Kerr and RHP Reiss Knehr. . San Diego also recalled OF Brent Rooker from El Paso to be the team's 27th man for the doubleheader.

The previous scheduled doubleheader in San Diego was Aug. 16, 1998, against Milwaukee at Qualcomm Stadium. Also, Saturday's twin feature was the first doubleheader at Petco Park since it opened in 2004. ... This was Colorado's fifth doubleheader of the season.