Dodgers' Kershaw loses to Giants in return from month out 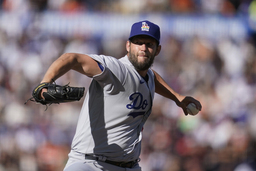 Los Angeles outhit the Giants 13-5 but stranded 14 runners and went 2 for 10 with runners in scoring position. The Dodgers have lost eight of their last 12 games.

"The story of the game was we weren't good at all with runners in scoring position," Dodgers manager Dave Roberts said. "And it wasn't needing to get a base hit with two outs. It was situationally today, all day. We just didn't finish innings."

Kershaw (4-1) had been sidelined by an inflamed joint in his back since a May 7 win at the Chicago Cubs. He returned on the same day Dodgers ace Walker Buehler went on the injured list with a right flexor strain.

Los Angeles said Buehler will not throw for six-to-eight weeks, a timetable that means he won't pitch on a major league mound until late August or September, at the earliest.

Estrada drove a 1-2 slider over the wall in left for his fourth homer and Luis Gonzalez added a 2-out RBI single in a 31-pitch second inning.

Cody Bellinger hit an RBI double in the eighth off Jarlin Garcia, and Camilo Doval escaped a bases-loaded jam when he struck out Gavin Lux on a 2-2 slider and Mookie Betts on a full-count slider after falling behind on a 3-0 count.

Craig Kimbrel allowed a run to score on his second pitch of the bottom half, an inning that included a pair of walks, as the Giants took a 3-1 lead. Kimbrel threw just seven of 18 pitches for strikes.

Freddie Freeman homered in the ninth off Jose Alvarez, Freeman's fifth this season.

Los Angeles threatened with singles by Trea Turner and Will Smith before Bellinger grounded out, giving Alvarez his first save since April 14, 2019, for Philadelphia at Miami.

Garcia had gotten out of bases-loaded trouble in the seventh, striking out Freeman and getting Turner to ground into a double play. Garcia said taking the first two of this three-game series against the Dodgers, heavy favorites to win the National League West, is important.

"I think it's the right moment to show them that we also have talent, that we're able to compete," Garcia said through an interpreter. "Coming out with two wins right now, I think it's just the perfect message."

The Giants and Dodgers wore logos on their hats to commemorate Pride Day at Oracle Park.

Dodgers: LHP Andrew Heaney (left shoulder discomfort) is on track for a final rehab appearance Tuesday with Double-A Tulsa. If that goes well, he's tentatively scheduled to return to the big league club and start June 19th against Cleveland.

Giants: RHP Jakob Junis (left hamstring strain) was placed on the 15-day IL and OF Heliot Ramos was recalled. Ramos started in right field and hit third. . 3B Evan Longoria (left hamstring tightness) took batting practice but did not play. . 1B Brandon Belt (right knee inflammation) did defensive drills before the game, and his return could come as early as Sunday.