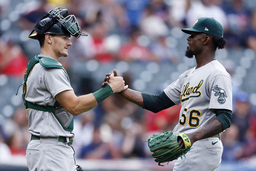 CLEVELAND (AP) Seth Brown hit a grand slam to cap a five-run seventh inning, and the Oakland Athletics stopped a 10-game losing streak - their longest in 11 years - by defeating the Cleveland Indians 10-5 on Saturday.

Oakland right fielder Ramon Laureano appeared to make an emotional speech before the rally, screaming in the dugout. He was ejected in the middle of the seventh by first base umpire Paul Emmel.

Steven Vogt, Christian Bethancourt and Sean Murphy also homered for Oakland, and Vogt had three hits and was hit by a pitch.

Oakland was outscored 60-20 during its longest skid since the A's lost 10 in a row from May 30 to June 9, 2011. Oakland lost nine straight this year from April 29 to May 8, giving the A's a pair of losing streaks of nine or more games in the same season for the first time since 1978.

Frankie Montas (3-6) allowed five runs and eight hits in six innings to win for the first time since April 18 against Baltimore. He had been 0-5 in his previous nine starts despite a 2.87 ERA in that span.

Brown's homer came on a full-count fastball from Eli Morgan with two outs as Oakland rallied from a 5-2 deficit. Brown took a close 2-2 pitch that saw Morgan bounce off the mound thinking it was strike three. Brown sent the next pitch to the right field seats for his first career slam.

The Athletics took a 2-0 lead into the fourth, but that quickly disappeared thanks in part to another key hit by Jose Ramirez, who followed with a dash around the bases. Cleveland scored four times on a throwing error, an RBI groundout, a sacrifice fly and a run-scoring bunt hit.

Vogt and Matt Davidson singled off Zach Plesac to start the seventh. Morgan (2-2) got a strikeout, but first baseman Josh Naylor committed a throwing error on Tony Kemp's ground ball that scored a run and cost the Guardians a out.

Bethancourt's infield hit with two outs kept the inning going before Brown delivered, silencing the crowd and causing Oakland's players to leap from the dugout in celebration.

Plesac turned in the play of the day when he threw Cristian Pache out at first. Plesac made a barehand grab of the slow roller hit to the right of the mound .

Athletics: 2B Jed Lowrie (wrist, shoulder soreness) was out of the lineup for the second straight game.

Guardians: RHP James Karinchak (strained upper back) struck out one in a scoreless inning on a rehab assignment at Triple-A Columbus on Friday.

Athletics: LHP Cole Irvin (2-2, 3.00 ERA) allowed one run over six innings against the Guardians in Oakland on April 30.