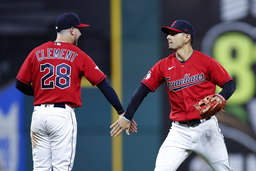 CLEVELAND (AP) After Terry Francona got done railing at the umpires, the Guardians rallied without their manager.

Andres Gimenez drove in the go-ahead run with a single in Cleveland's four-run eighth inning, and the Guardians scored six runs after Francona was ejected for an 8-4 win Thursday night over the Oakland Athletics, who dropped their ninth straight.

Gimenez looped a single into left field off Lou Trivino (1-5) and rookie Richie Palacios delivered a pinch-hit, two-run double in the eighth as the Guardians went over .500 for the first time since May 9, when they were 15-14.

Cleveland was down 4-2 in the sixth before scoring six runs after Francona got tossed for arguing.

"I was excited watching it," Francona said of the comeback.

Rookie Oscar Gonzalez got four hits, Steven Kwan added three and Jose Ramirez and Josh Naylor homered for Cleveland, which has won eight of 10 and stayed competitive despite seven rainouts at home.

"It's a testament to our team culture," said Kwan, who is batting . 429 (9 of 21) in June. "We've always stayed positive kind of moving through these weird times."

Christian Bethancourt hit a two-run homer - and nearly had two more homers - for the young A's, who now have two nine-game losing streaks in the same season for the first time since 1978.

Kwan's two-out RBI single tied it for Cleveland in the seventh, an inning after he was involved in the play that got Francona thrown out.

Kwan beat out an infield single and stole second with a headfirst slide. When the throw sailed into center, Kwan tried to get up but Oakland shortstop Elvis Andrus was sprawled on top of him.

Francona came out and argued with second-base umpire Jeremie Rehak that Kwan should get third. The umpires convened, and when they ruled Kwan didn't deserve the extra base, an infuriated Francona was tossed by crew chief Paul Emmel.

It was Francona's first ejection this season and the 45th of his career.

"I didn't understand. I don't think you reward the offending team," Francona said. "He (Rehak) told me `There was no way he was getting to third.' I said `Well, he didn't get a chance. He was trying.' So then he asked all the umpires and they said the same thing. So I told all four of them I thought they were wrong. Then I told them to tell the guy in New York I thought he was wrong."

"We know he cares, but kind of seeing him out there and putting his neck on the line for us, it definitely kind of gets everybody going," he said.

The A's had built a 4-2 lead in the sixth on three straight two-out doubles by Bethancourt, Andrus and pinch-hitter Seth Brown.

Bethancourt homered in the second, flew to deep left in the third and doubled in the sixth and eighth.

"Bethancourt hit four of the hardest balls we've had hit in a game," said A's manager Mark Kotsay. "Shoot, he could have easily had four home runs if he gets a click under those two line drives. He's really locked in."

Ramirez and Naylor connected for back-to-back homers on the first three pitches by starter James Kapriellan in the fourth.

Ramirez kept up his torrid pace, leading off with his 15th homer. Naylor followed with his seventh, giving the Guardians consecutive homers for the first time since the team's name change.

Gonzalez has hit safely in 12 of 13 games, joining Roger Maris (1957) as the only players in Cleveland history to start their careers that well.

Francona hasn't forgotten the day in Boston when the Red Sox released Kotsay, who was an outfielder.

"I remember literally shedding tears when we did it," he said. "It was hard."

"Tito is a man of emotion," Kotsay said. "He cares about his guys, probably to the point where it impacts them physically, and I would say there is some of that in myself."

The Guardians pulled off a successful pickoff play at second base Wednesday against Texas, the first for a Cleveland team since July 9, 1985.

Francona was stunned to learn it had been 37 years between pickoffs.

"I'm really surprised," Francona said. "You would just think over the course of time, something would happen."

After a nearly two-hour rain delay, right-hander Eli Morgan spun before throwing a pitch in the fifth and nabbed Adolis Garcia. The Guardians schemed the move during the delay.

"That was fun," Francona said. "It was like you're in your backyard. You're kind of drawing it up, talking to the guys. It was fun to watch it play itself out."

Guardians: RHP Aaron Civale allowed one run in two innings (50 pitches) in a rehab start for Triple-A Columbus at Indianapolis. He's been out since May 20, when he fell covering first base and suffered a bruised left glute muscle.

Triston McKenzie (3-5, 3.10 ERA) allowed just three hits over seven innings in his last start, but all three were home runs. The right-hander starts for the Guardians against Oakland RHP Paul Blackburn (5-2, 2.62), who has dropped his past two starts.