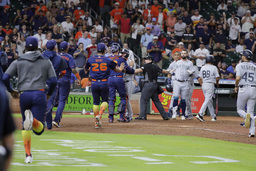 HOUSTON (AP) Astros reliever Hector Neris whizzed a pitch at Mariners slugger Ty France, and Seattle manager Scott Servais led his team toward a melee at home plate. Both sides shoved and shouted - except for cool-headed 21-year-old Julio Rodriguez, who wrapped up Neris in his arms and pulled him safely away from the scuffle.

The Mariners star rookie wasn't as protective when stepped in the batters' box moments later.

Rodriguez hit a two-run homer in the ninth inning moments after Servais was ejected for his role in a benches-clearing fracas, Cal Raleigh added a career-high four RBIs and the Mariners beat Houston 7-4 Monday night.

Rodriguez kept it calm during the tense ninth inning, when Neris drilled Ty France with a pitch, then he let out his emotions with a vicious yell near first base after connecting.

"After that whole situation and to be able to deliver for a team like that ... I definitely was fired up," he said. "I never really talk or yell during my homers like that. But given the situation I felt I needed to do it and kind of let all my emotions go out."

The trouble began when with two outs in the ninth, when Neris plunked France in the back. Players and coaches on both sides began chirping at each other, and Servais led the way as Seattle's bench emptied to confront the Astros near home plate.

"All I know is our best hitters is in there, it's two out in the ninth and you throw the first pitch behind him," Servais said. "It's pretty obvious."

Rodriguez pulled Neris away from the scrum, while Servais and Houston manager Dusty Baker were at the center of the pushing and shoving, with Servais pointing and shouting repeatedly at Astros first base coach Omar Lopez.

Servais and Lopez were ejected, and both benches were given warnings.

Rodriguez homered and J.P. Crawford walked before Neris was ejected after throwing a pitch behind Eugenio Suarez's head. Baker was also automatically ejected because of the warning.

Baker denied that Neris intentionally threw at either player.

"The pitch behind France, in a one-run game you're not going to put anybody on, nobody is throwing at him," Baker said. "We don't do that anyway. It was a series of bad events and I don't want to talk about it too much more because I'm already kind of (upset)."

Neris also denied that his errant pitches were on purpose and even France didn't believe the one that hit him was intentional.

"The timing wasn't right for it to be intentional," France said. "So I don't know if it was not, but I don't think it was."

Servais raved about the poise Rodriguez showed to give the Mariners some insurance with his homer.

"Some guys step up in those moments," he said. "You get the emotion and you get a little edge to you. It's a good thing."

Raleigh's three-run homer gave Seattle a 4-1 lead in the second inning, but the Astros scored three runs in the bottom of the inning to tie it.

The game was still tied in the fourth when Adam Frazier doubled with no outs. The Mariners went on top 5-4 when Frazier scored on a two-out single by Raleigh.

Houston starter Cristian Javier (3-3) struggled, allowing six hits and five runs in 3 2/3 innings after entering the game 3-0 with a 0.40 ERA in six career games, with three starts against the Mariners.

Jose Altuve, Kyle Tucker and Chas McCormick each hit a solo homer for the Astros, but they couldn't do much else on offense, going 1 for 9 with runners in scoring position.

The Mariners led early after an RBI double by Crawford in the first inning.

Houston tied it when Altuve sent Ray's third pitch of the game into the seats in left field. It was his sixth leadoff homer this season, which ranks second in the majors behind Toronto's George Springer, who has seven. It gives him 175 career homers, which moves him past Springer into sole possession of fifth place on Houston's all-time list.

Mariners: RHP Erik Swanson (right elbow inflammation) is scheduled to make one more rehabilitation appearance with High-A Everett before coming off the injured list to join the team sometime during their next homestand, which begins Friday.

On the day that Houston's Yordan Alvarez and the Astros finalized a $115 million, six-year contract extension, the slugger was named the AL Player of the Week.