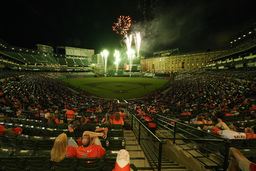 BALTIMORE (AP) Yes, Shane Bieber thought about a no-hitter as he shut down Baltimore into the middle innings.

"Oh, I think that from pitch one," the Cleveland right-hander said. "Until I give one up. I think anybody that tells you otherwise is lying."

Bieber held Baltimore without a hit until the sixth inning and Owen Miller drove in four runs in his first two plate appearances as the Guardians rolled to a 6-3 victory over the Orioles on Friday night.

Bieber (3-3) was more than halfway to Cleveland's first no-hitter since 1981, but the majors' longest active drought endured when Trey Mancini lined a two-out single to left field in the sixth. Bieber issued a walk in each of the first two innings, but Mancini had Baltimore's only hit until the right-hander gave up two more singles to start the eighth and was lifted.

Cleveland hasn't had a no-hitter since Len Barker threw a perfect game against Toronto on May 15, 1981.

Miller - batting one spot behind Jose Ramirez - hit a two-run double in the first inning and a two-run single in the third. Ramirez scored on both hits, coming all the way around from first on the latter after Cedric Mullins made a diving attempt in center field and the ball bounced away from him a bit.

Bieber struck out 11, although the two runners he left on base in the eighth scored when Mancini drove them in with a double. Anthony Santander followed with an RBI single to make it 6-3, but the Orioles got no closer.

Emmanuel Clase worked a perfect ninth for his eighth save in 10 chances.

Ramirez, the clear standout in an otherwise ordinary Cleveland lineup, doubled in his first at-bat, leaving runners on second and third for Miller to drive in. In the third, Ramirez hit a one-out single, leaving men on first and third. When Mullins couldn't come up with Miller's sinking liner, Ramirez sprinted around the bases and scored on a close play at the plate.

Josh Naylor followed with an RBI single that made it 5-0. Naylor also had an RBI double in the seventh after Miller singled for his third hit.

The Guardians have won four in a row.

Bieber struck out the last hitter of the third and his first two of the fourth. Oscar Mercado then made a diving catch in right on Ryan Mountcastle's line drive. In the fifth, left fielder Ernie Clement made a nice running catch on Adley Rutschman's fly ball near the foul line to keep the no-hit bid going a little longer.

The Guardians swung at six of Zimmermann's first eight pitches and made contact on all of them. That included a solidly hit flyout by Myles Straw on the game's first pitch, then hits by Amed Rosario, Ramirez and Miller.

"We knew we needed to hit strikes, and he threw a bunch of strikes," Guardians manager Terry Francona said. "We did a good job early. We ran the bases very well early - aggressive and intelligent."

Triston McKenzie (3-4) takes the mound for Cleveland on Saturday against Baltimore's Tyler Wells (2-4). Wells is coming off a win at Boston in which he pitched six scoreless innings.