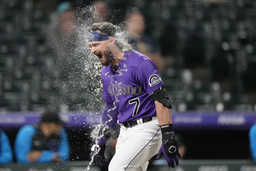 DENVER (AP) Brendan Rodgers hit three home runs, including a two-run walkoff drive in the 10th inning, to help the Colorado Rockies beat the Miami Marlins 13-12 on Wednesday night for a doubleheader split.

Rodgers, who had a one-out ninth-inning double in Miami's 14-1 rout in the first game, went deep against Marlins lefty Trevor Rogers to lead off the second to give extend his hitting streak to 19 games. Then his liner to left in the fifth inning gave him his first multi-homer game.

The magic came in the 10th, when he pulled a changeup from Cole Sulser (0-3) that nudged just over the left-field wall to give the Rockies their first series win in eight tries.

"I don't think I've hit three homers ever in my life, not even in Little League, travel ball, minor leagues. This is the first time," Rodgers said. "I'm definitely going to remember this forever."

In the first game, rookie right-hander Edward Cabrera took a no-hitter into the sixth inning and struck out nine to earn his first big-league win, Jazz Chisholm Jr. homered and drove in four, and the Marlins had 21 hits.

"The first one went really well. Second one ... you don't hardly ever get out of here without having to go through one of those," Miami manager Don Mattingly said. "It was one of those that just seemed like the outs were hard to come by."

After Daniel Bard (3-2) worked around two walks in a scoreless ninth, he walked two more in the 10th and Garcia's fly to center scored automatic runner Jon Berti.

Ryan McMahon tripled, doubled and drove in four for Colorado, which overcame three errors in the second game.

McMahon had a three-run triple in the third and an RBI double in a five-run fifth that put Colorado ahead 10-7. McMahon's throwing error at third base in the sixth led to four unearned runs. But Brian Serven's third RBI single of the game in the sixth tied it at 11.

Sanchez, who smacked a 496-foot homer to the top of the third deck in right field on Monday, belted a 1-1 sinker 460 feet to right center for a two-run homer in a four-run fourth to put Miami ahead.

That inning included throwing errors by Marquez and Rodgers (who plays second base) as Colorado's defensive woes continued.

"I was just trying to make up for that horrible error I made," Rodgers said.

In the first game, Cabrera, a 24-year-old from the Dominican Republic, used a fastball topping out at 99 mph with a slider and changeup to baffle Colorado's lineup. He allowed one hit over six innings, overcoming four walks and two hit batters. He even threw a changeup that was clocked at 96 mph.

"This is a game I dedicated to my aunt, who passed away a few days ago," Cabrera said through an interpreter. "I always felt she was there. She was with me during the whole game, so it was very special."

Cabrera hit Yonathan Daza above the left elbow with a 98 mph fastball to lead off the sixth, and then C.J. Cron lined to left for the Rockies' first hit. Cabrera (1-0) later got Sam Hilliard to fly to left with the bases loaded to end the threat.

Chisholm hit a three-run homer in the fourth inning off Game 1 starter Antonio Senzatela (2-3), who gave up a career-high 13 hits and six runs in 5 1/3 innings in his first start after being sidelined with a sore back.

The Marlins were without Joey Wendle (hamstring) and Brian Anderson (back), who were both placed on the 10-day injured list. They didn't need their offense in the opener: Everybody in Miami's lineup had a hit by the fourth inning and the top five in the order went a combined 14 for 28.

Marlins: It's the third time Wendle has been sidelined this season with a right hamstring strain. ... Anderson should be able to return when he's eligible on June 7, Mattingly said. ... DH Garrett Cooper was pinch-hit for in the fourth inning of Game 2 due to muscle tightness in his right side. ... C Nick Fortes stayed in after getting hit in the helmet by Chad Smith's 97 mph pitch in the seventh in the opener.

Rockies: LHP prospect Ryan Rolison, on the 60-day injured list, is scheduled to see a shoulder specialist on June 13. ... Black said Daza was sore after getting hit. He wasn't in the Game 2 lineup, but pinch-ran in the 10th.

Atlanta claimed Marlins INF Joe Dunand off waivers and optioned him to Triple-A Gwinnett. Dunand went 3 for 10 with a homer in three games with Miami.

Rockies: LHP Austin Gomber (2-5, 5.51) faces Atlanta RHP Ian Anderson (3-3, 4.34) on Thursday night in the opener of a four-game series at Coors Field. RHP Ryan Feltner, who earned his first major league win Monday after being recalled from Triple-A Albuquerque, is expected to remain with the team and start Sunday's series finale.