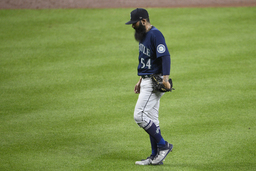 BALTIMORE (AP) Ryan Mountcastle and Ramon Urias hit two of the Orioles' four homers with back-to-back shots in the sixth inning, and Baltimore cruised past the Seattle Mariners 9-2 Wednesday night.

Rougned Odor and Trey Mancini also connected for the Orioles, who bounced back from a 10-0 defeat the prior night.

"I think one of the biggest differences with this team is we lose 10-0 last night, really tough game, and then we come back today and washed it," Mancini said. "In years prior, we let things like that bleed into the next few days too many times and that has not been the case at all this year. I'm really proud of this team for how we respond after those tough days."

Austin Hays went 1 for 2 with two walks and an RBI, extending his hitting streak to 12 games.

Reliever Cionel Perez (4-0) picked up the win with 1 1/3 scoreless innings.

Baltimore pulled away with five runs in the sixth. Mountcastle and Urias gave the Orioles a cushion with back-to-back home runs. Cedric Mullins hit an RBI double and Mancini connected for a two-run shot that boosted the lead to 9-2.

It was the first time the Orioles had at least three home runs in an inning since 2020.

"My stuff was good tonight," Ray said. "There were just some things that did not go my way."

Odor gave the Orioles a 3-0 lead with the towering shot off Ray that traveled 381 feet onto the right-field flag court in the second. Odor has reached base safely in 13 of his last 16 games, hitting .276 with four doubles, one triple, four home runs, 16 RBI, and nine runs scored since May 16.

J.P. Crawford cut the margin to 3-1 with a solo homer off Orioles rookie Kyle Bradish in the fourth.

Seattle cut the margin to 3-2 in the fifth when Julio Rodriguez bounced a chopper to Odor, whose flip to Jorge Mateo on an attempted force was late, allowing Taylor Trammell to score.

"I got to find a way to get into that sixth or seventh inning to save our bullpen," Bradish said. "Any time you can give your team a chance to win, it's awesome ... but there's always room to improve."

Mancini missed a solo homer by about a foot against the left-field wall but scored on a single by Hays and the Orioles led 4-2 in the fifth.

"It just seems like he's hitting the ball hard and none of them are going over the fence," Mountcastle said. "He finally got one."

Orioles: RHP Denyi Reyes was recalled from Triple-A Norfolk. ... LHP Zac Lowther was optioned to the Tides. ... Received RHP Yaqui Rivera as the player to be named later from the Miami Marlins to complete the LHP Tanner Scott and RHP Cole Sulser trade.

Mariners: INF Abraham Toro (left shoulder sprain) was reinstated from the 10-day IL. ... OF Kyle Lewis (concussion) was placed on the seven-day IL, retroactive to May 29.