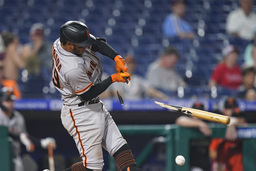 After a fielding error by Jeurys Familia allowed Wilmer Flores to score in the 10th to give San Francisco a 4-3 lead, Philadelphia tied it when Alec Bohm's two-out grounder up the middle hit the second base bag, bouncing over Thairo Estrada and allowing pinch-runner Roman Quinn to score.

But the Giants scored three times in the 11th and sent the Phillies to their fifth straight loss. Donovan Walton doubled in automatic runner Joey Bart to make it 5-4. With two outs, Pederson smacked his 12th homer of the season - a towering shot off Andrew Bellatti (1-2) to the second deck in deep right center.

"It was one of those where you just black out," said Pederson, who entered the game in the seventh inning as a pinch hitter for designated hitter Curt Casali. "It felt really good coming off the bat - it hit the perfect spot on the bat and you really don't feel anything."

The Phillies did end up loading the bases in the 11th as Giants manager Gabe Kapler decided to intentionally walk Bryce Harper - the potential tying run - to face Quinn, who had been subbed into the cleanup spot for Nick Castellanos. Quinn struck out to end the game.

"We had a discussion at the mound about what we wanted to do and whether we would throw a few pitches and seeing whether he would bite," Kapler said, adding that catcher Joey Bart suggested they walk Harper. "That was impressive because you don't see that from a young catcher often."

Jose Alvarez (2-1) struck out two and walked two in 1 1/3 innings to earn the win for the Giants, who scored the winning runs against Bellatti for the second straight day. On Monday, Casali hit a two-run homer to lift San Francisco to a 5-4 victory.

The Phillies have lost three straight games in extra innings and 12 out of their last 16 games overall as questions about manager Joe Girardi's job status have become a headline. Even after receiving multiple votes of confidence from team president Dave Dombrowski for his manager, Girardi's status is uncertain because of the Phillies' franchise-record payroll of $224 million and overall sloppy play.

"June has to be better," Girardi said. "These last two weeks have been really frustrating for our club. We've had a lot of tough losses. The last two - the way we've lost - it's been really tough. We've had opportunities to win, but we just haven't been able to do it."

After standing for the national anthem Monday in honor of the Memorial Day holiday, Kapler remained in the clubhouse Tuesday to protest the direction of the nation after the school shootings that killed 21 in Uvalde, Texas, last week.

Only a handful of Giants players were on the field when the anthem was sung, but it was unclear whether the move was one of solidarity with their manager. It is not uncommon for players to remain in the clubhouse during the national anthem as they continue pregame preparations.

It was the fourth time in five days Kapler decided to stay in the clubhouse. During his pregame session with the media before Tuesday's game, Kapler refused to indicate which way he was going to act.

"The protest was not about the anthem and I think I made that clear as well," Kapler said. "The landscape is ever-changing and these issues are not black and white. They require - in my opinion - a lot of thought and a lot of action. I don't know that it's necessary to answer questions about this on a day-to-day basis about whether I'm coming out for the anthem. I think it important to recognize that peaceful protest of any kind on important issues like gun control and in particular gun safety are important to me and I will continue to be expressing my thoughts going forward."

Giants: 3B Evan Longoria was pulled from the game with right shoulder soreness. He is listed as day-to-day and could be available for pinch-hitting duties on Wednesday against Aaron Nola. ... OF Darin Ruf was placed on the bereavement list after the sudden passing of his father Monday night. To fill Ruf's spot on the roster, the Giants called up OF Heliot Ramos from Triple-A Sacramento. ... LHP Matt Boyd is scheduled to throw a bullpen session Wednesday in San Francisco. Boyd, who signed with the Giants in the offseason, had surgery for a left elbow strain that placed him on the 60-day injured list in March.

Phillies: 2B Jean Segura left in the seventh after a pitch from Giants sidearm reliever Tyler Rogers appeared to catch him in the hand during a bunt attempt. Girardi indicated Segura broke his right ring finger and was scheduled to undergo a CT scan Wednesday to determine the severity of the injury. ... SS Didi Gregorius started a rehab assignment at Triple A Lehigh Valley on Tuesday night as he recovers from a sprained left knee.

The series wraps up on Wednesday night with the Giants sending left-hander Carlos Rodon (4-4, 3.60 ERA) against Phillies righty Aaron Nola (2-4, 3.56).