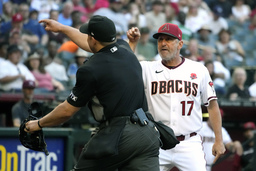 PHOENIX (AP) Arizona pitcher Zac Gallen got mad in the fifth inning, catcher Jose Herrera got a little madder but manager Torey Lovullo was the maddest of them all, rushing onto the field to argue with the home plate umpire before his quick ejection.

The Diamondbacks may have lost their manager, but the argument - complete with pointing and yelling in umpire John Libka's face - might have helped win the game. Not long after Lovullo was tossed, Arizona scored three runs in the fifth to break the game open and ended up beating the Atlanta Braves 6-2.

"That seemed to kind of calm us down but also light a fire under us a little," Gallen said.

"It was just a really, really good game for us after four tough games," said Lovullo, pointing to Arizona overcoming a four-game losing streak by bouncing back after being swept by the Dodgers over the weekend. "We were ready to go. It speaks volumes about the toughness of this team. Now we've got to do it again tomorrow."

Pavin Smith hit a three-run homer early in the game, giving the D-backs a 3-1 lead, and then came the fifth.

All three runs scored after the Braves should have been out of the inning: Gold Glove first baseman Matt Olson dropped a throw that would have completed an inning-ending double play. Ketel Marte had a two-run double on a scorched line drive to the center field wall and David Peralta followed with an RBI single that brought home Marte.

Gallen (4-0) gave up two runs over 5 2/3 innings, scattering seven hits and two walks while striking out six. The right-hander has a 2.32 ERA this season through nine starts.

The 26-year-old is starting to regain the dominance that he flashed during the shortened 2020 season, when he was one of the best pitchers in the National League and finished ninth in the NL Cy Young voting.

Gallen said when the team's on a skid, it's his job to make sure it doesn't go any further.

"If you want to be a front-line guy, it's one of those things that doesn't show up in the box score," Gallen said. "It's your turn to take the ball, it's your turn to put an end to this. Let's start something new."

Spencer Strider (1-2) made his first career start for the Braves after 13 career appearances out of the bullpen. The right-hander has an overpowering fastball that hovers near 100 miles per hour and showed it by striking out the first two hitters he faced.

That early success quickly hit a speed bump. Marte reached on an infield single, Peralta followed with a bloop double and then Smith crushed a ball deep into the right-field seats.

Strider was better for the next few innings but was pulled after running into trouble in the fifth. He gave up five runs over 4 1/3 innings, striking out seven while giving up four hits and two walks.

Austin Riley hit a solo homer for Atlanta, which was his 12th long ball of the season.

The sequence that got Lovullo tossed started when Gallen got upset about a borderline pitch to Ozzie Albies that was called ball three and had a few words with Libka. The next pitch was low and Albies walked.

After Gallen said something else, Libka started to walk toward the pitcher's mound before catcher Herrera got in front of him. The situation looked like it was calming down before Lovullo charged out of the dugout, yelling and pointing in the umpire's face.

"Things escalated quickly," Lovullo said. "I ran out there mad because I just hadn't liked what I'd seen."

Braves manager Brian Snitker said after the game that star Ronald Acuna Jr. would be in right field for one of the two remaining games in Arizona after serving as the DH for Monday night's game.

Acuna's time in the outfield this season has been limited because he's still coming back from last year's knee injury.

The teams continue their series on Tuesday. The D-backs will throw RHP Humberto Castellanos (3-2, 5.22 ERA). The Braves will counter with RHP Charlie Morton (3-3, 5.28).