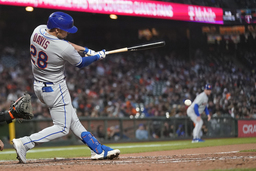 SAN FRANCISCO (AP) Buck Showalter believes in this New York Mets offense, especially if his players keep taking tough at-bats the way they did in the series opener against San Francisco.

"We were fortunate. We had a lot of not-very-firm-hit balls but that's what happens when you fight to put the ball in play, some things like that can happen," Showalter said after the manager celebrated his 66th birthday. "The guys continue to grind at-bats and good things happen. Keep the want-to going like these guys have. They just got into a real pass-the-baton thing."

Jeff McNeil added a two-run homer in the eighth inning and Mark Canha followed with a solo drive in his return to the Bay Area after playing for the Oakland Athletics. That was the second time the Mets connected for back-to-back homers this year, also on April 15 against Arizona.

"A lot of fun, a lot of energy today - happy birthday to Buck," McNeil said. "The team celebrated and it was a lot of fun. We started off a little slow out there, too, and were able to pick it up and get him a nice win on his birthday."

Brandon Crawford put the Giants on the board first with a two-run homer in the second off lefty David Peterson (2-0), pitching in Max Scherzer's place with the ace right-hander sidelined by an oblique strain.

"I love the way he responded after the homer. That was a good shot in the arm for him to get through six innings," Showalter said.

J.D. Davis broke out of a slump with four hits for the NL East-leading Mets, who are in a grueling stretch with 16 games in as many days. They won for the fifth time in six games, and were certainly thrilled with sunny skies and warm San Francisco temperatures - at least until the late innings - after coming from a Colorado snowstorm.

Eduardo Escobar contributed a two-run double in the ninth as the Mets finished with 18 hits. Davis hit an RBI double in the sixth and a run-scoring single in the ninth for New York (29-15), which set a season high for runs and moved a season-best 14 games over .500.

Peterson, just recalled from the minors, received ample run support from the Mets' big-swinging lineup while again pitching beautifully on the road.

Alex Cobb (3-2) was tagged for 10 hits in his second straight start.

"He understands that there are some challenges right now. We're not making as many plays as we can," Giants manager Gabe Kapler said.

Cobb struck out seven and didn't walk a batter over six innings. He had won his previous two outings despite allowing eight earned runs and 13 hits over 10 2/3 innings.

"I felt like I was executing some pitches tonight and the results weren't quite there," Cobb said. "The overall loss is tough. ... You go through them throughout the season."

Donning party hats, the Mets surprised Showalter for his birthday with a team celebration in the indoor batting cage before meetings. They sang to the manager, who was led down to the area by Escobar.

"The game's always better, but that was fun," Showalter said.

Mets: RHP Tylor Megill played long toss as he works back from right biceps inflammation that landed him on the injured list.

Giants: OF Austin Slater was placed on the 10-day IL with inflammation in his left wrist after he hurt it Sunday. San Francisco recalled OF Stuart Fairchild from Triple-A Sacramento to take his place. He started in center field and batted ninth, going 0 for 2.

RHP Chris Bassitt (4-2, 2.77 ERA), who starred across the bay with Oakland, pitches Tuesday for the Mets. He is 1-2 with a 3.33 ERA in four career starts vs. the Giants and has never won in San Francisco's ballpark with only one prior outing here. The Giants counter with RHP Logan Webb (5-1, 3.54), seeking his fifth straight win.