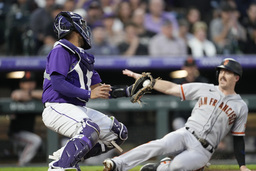 DENVER (AP) Tommy La Stella homered on the second pitch of the game and doubled twice as the San Francisco Giants extended their dominance against Colorado with a 10-7 win over the Rockies on Tuesday night.

San Francisco has won 12 straight against NL West rival Colorado dating to Aug. 15, 2021. It's the longest streak for the franchise versus a single opponent since the New York Giants took 12 in a row from the Philadelphia Phillies from July 1945 to April 1946.

"I'm just not wanting to celebrate that sort of thing," San Francisco manager Gabe Kabler said. "We've got a baseball game (Wednesday) and I'm thinking about trying to win that."

Camilo Doval pitched the ninth inning for his seventh save. The Giants have won eight in a row at Coors Field.

"I think it's just things run the right way for a number of games," La Stella said. "It's a good team on the other side and in a place like this the game is really never over."

Randal Grichuk homered and C.J. Cron had three hits for the Rockies, who have dropped eight of nine overall.

La Stella spent the first five weeks of the season with right Achilles inflammation but was activated from the injured list before the start of the series.

He grounded out in his season debut Monday night but in his second at-bat of the year he hit a 93 mph sinker a projected 464 feet into the second deck in right field. That started a 14-hit outburst, with Mike Yastrzemski and Brandon Crawford also finishing with three hits apiece.

"I caught that one pretty flush," La Stella said. "Thought it felt good coming off the bat. I didn't know it's going to go 464."

Brendan Rodgers had an RBI single in the second for Colorado, but his second error of the game at second base started a four-run third inning for the Giants. Yastrzemski hit a two-run double, and Darin Ruf and Thairo Estrada had run-scoring singles off Rockies starter Chad Kuhl (3-2).

The Giants scored two runs each off Jhoulys Chacin and Justin Lawrence in the sixth, but Colorado scored five in the bottom of the inning - three on Grichuk's fifth homer of the season that ended the night for starter Alex Cobb (3-1).

It was Cobb's second win over the Rockies in six days.

"Facing the same team twice and then pitching at Coors I kind of ran out of ideas to try to get through some of the high-leverage situations," Cobb said.

Giants: Kapler said he thinks LHP Jake McGee (lower back tightness) will spend the minimum time on the 15-day injured list. McGee is eligible to come off May 26. ... LaMonte Wade Jr. was held out of the starting lineup with soreness behind one of his knees.

The Rockies optioned catcher Dom Nunez to Triple-A and selected the contract of catcher Brian Serven from the Isotopes. It is Serven's first appearance on a major league roster.