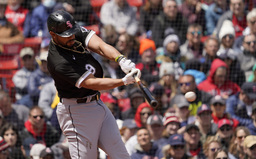 Leury Garcia added an RBI single for the White Sox (14-13), who moved over .500 for the first time since April 20 and completed a 5-0 road trip, including three wins at Fenway Park.

Christian Vazquez had an RBI single for Boston (10-19), which has lost a season-most five straight and 14 of 18.

Keuchel (2-3) allowed two runs on eight hits, fanning five and walking one after posting a 9.90 ERA in his previous three starts.

The game started at 11:38 a.m., an unusual start time as part of an experiment by Major League Baseball for streaming broadcasts.

"I knew it was going to be interesting," Keuchel said. "I got to bed before 11 (Saturday night) but it was like the internal clock was so worried about getting up and getting ready to get the routine going. I'm pretty sure I woke up like five, six times to not want to oversleep."

Rookie left-hander Bennett Sousa got pinch-hitter Kevin Plawecki on a fly to center for the final out, recording his first big league save with the potential tying run at second. Regular closer Liam Hendriks was unavailable due to his recent workload.

"As soon as it was in the air, I knew it was going to be an out because of the wind," said a smiling Sousa. "I think I gave (catcher) Reese (McGuire) a big hug."

He said he got the ball.

"It's up to Sousa to do a job and he did it," Chicago manager Tony La Russa said. "Nothing bigger than Dallas pitching six innings with two runs, that's the biggest."

Abreu, who had a go-ahead double in Saturday's 3-1 comeback victory, sent his double down the left-field line in the third against fill-in starter Tanner Houck (2-3) after Garcia's hit pushed Chicago in front.

J.D. Martinez had a run-scoring groundout and Vazquez followed with his RBI single for Boston in the sixth.

"I'm very surprised," Red Sox third baseman Rafael Devers said through an interpreter of the team's struggles. "I know the quality of team that we have, so I know in the end everything is going to turn out and we're going to get to our full potential. Right now, it's not going our way."

Houck gave up three runs in 2 2/3 innings after replacing scheduled starter Michael Wacha. Wacha was placed on the 15-day injured list after experiencing soreness on his left side after his last bullpen session.

White Sox: 3B Yoan Moncada, on the IL since the last week of spring training with a strained right oblique, is expected back Monday. RHP Joe Kelly, on the IL with a right biceps injury, is also ready to return. ... La Russa said after the game that LHP Aaron Bummer had an MRI Saturday after feeling something in the back of his right knee and will go on the IL with a sprain or strain.

Red Sox: Manager Alex Cora said Wacha had an MRI on Saturday and "everything was clean," but about an hour later they announced he was going on the IL. RHP Tyler Danish was promoted from Triple-A.

Plate ump Ron Kulpa had to leave in the fourth after taking a foul off the mask that dropped him to the ground.

Trainers from both teams rushed out, Red Sox catcher Vazquez turned to help and the rest of the umpiring crew came to the plate. Kulpa stood before walking off on his own. First-base ump Marty Foster moved to the plate after a 20-minute delay.

White Sox: Open a three-game series at home against Cleveland on Monday. RHP Michael Kopech (0-0, 1.17 ERA) is set to start for Chicago.

Red Sox: Off Monday before beginning a five-game trip Tuesday in Atlanta. RHP Garrett Whitlock (1-1, 1.25) is slated to start against the defending World Series champs in the first of a two-game series.