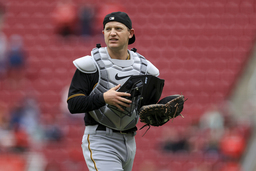 CINCINNATI (AP) Josh VanMeter had just one thought when he suddenly realized the Pittsburgh Pirates needed him as a catcher.

Forced into an emergency role, VanMeter had a rough time Saturday when he moved from second base for his first try behind the plate since he was a teenager. The Cincinnati Reds took advantage to end a nine-game losing streak, beating the Pirates 9-2 in the opener of a doubleheader.

"It's part of the job. They asked me to do it, and I did it to the best of my ability. I didn't feel too bad back there," VanMeter said.

"Hopefully, I won't have to do it again," he added.

Tyler Stephenson fouled a ball hard off VanMeter's mask, then hit a tiebreaking, bases-loaded double in the eighth inning that fueled a seven-run burst.

Pirates starting catcher Roberto Perez was helped off the field with a left hamstring injury after falling while rounding second base in the top of the eighth. Backup catcher Andrew Knapp had been ejected by plate umpire Will Little in the bottom of the sixth for chirping from the dugout.

That left VanMeter as the Pirates' next best option behind the plate, so he traded his infielder's glove for a catcher's mitt.

It had been a while, too, for a player who's listed as a second baseman/outfielder.

"I think it was when I was 14 in summer ball, but they didn't throw as hard and their stuff didn't move like that," he said.

"It's part of the game. They needed somebody to step up," he said.

The 27-year-old VanMeter, who began his career with Cincinnati in 2019 and is in his first season with the Pirates, took his new spot to begin the eighth. He also showed how hard it is to be a catcher, even for a pro who has played most everywhere on the diamond.

Working with a new, inexperienced batterymate, Wil Crowe (1-2) hit Brandon Drury with a pitch and walked Tommy Pham and Mike Moustakas to start the eighth with no outs and the score 2-all.

VanMeter tried to corral Crowe's assortment of fast, darting sinkers and sliders, but said he felt badly for the pair of pitchers Pittsburgh used in the eighth. The Pirates don't use the electronic signaling system that some other teams employ.

"We couldn't get on the same page, but I'm proud of the way I caught," he said.

Stephenson stepped up and fouled the first pitch directly back. VanMeter took off his mask for a moment to recover and Little went to the mound to give Crowe a new ball, giving the new catcher a break.

"I really didn't feel it," VanMeter said. "Actually, my legs are sore from crouching."

Stephenson, the Cincinnati catcher, and VanMeter shared a few words in the interim.

With the count 0-2, VanMeter stabbed at three straight sliders near the zone but didn't get any of the calls - perhaps his obvious lack of pitch framing experience cost the Pirates.

"I feel like I got a little lucky with VanMeter back there," Stephenson said. "Crowe actually made some good pitches at the bottom of the zone that I took. Going back to look, they might have been there."

"It is the first time I've ever experienced that with someone who isn't a catcher. I mean, it was new for me. It was just weird," he said. "He did good for someone for never doing it. I know Josh well. When I went up to hit, I told him he should take that to arbitration to get paid a little bit more."

Stephenson followed by hitting a line drive down the right field line that eluded a diving Ben Gamel and rolled to the wall for two runs. It was Stephenson's third hit of the day and gave him a career-high four RBIs.

Kyle Farmer added a sacrifice fly before Tyler Naquin drove in three runs with a bases-loaded double. Only three of the runs were earned after pitcher Beau Sulser's error.

"To his credit, he did a good job. It's not easy, and Crowe is not easy to catch," Pirates manager Derek Shelton said.

"It's really unfortunate for him because he had to change his game plan. (VanMeter) did an admirable job," he said.

Knapp took a big part of the blame for leaving VanMeter in that position. Knapp wasn't in the game when he was tossed for arguing a check-swing from the bench.

"That falls on me. I've got to have a cooler head. It was a stupid mistake," he said.

Watching from the clubhouse when Perez was hurt, Knapp knew that meant problems for Pittsburgh.

"It's a horrible feeling. It feels terrible. It shouldn't happen. I've got to be smarter than that. I've never been thrown out in the big leagues," he said.

The Pirates put Perez on the 10-day injured list after the game with a strained left hamstring. They have selected the contract of catcher Michael Perez from Triple-A Indianapolis.

The Reds posted their highest run total of the season and won for the first time since beating St. Louis 4-1 on April 24. Cincinnati still owns baseball's worst record at 4-22.

Pittsburgh loaded the bases with nobody out in the eighth against Lucas Sims (1-0), who bounced back to strike out Ke'Bryan Hayes, Daniel Vogelbach and Michael Chavis.

The Pirates have lost three of their last four and seven of their last nine games. Saturday's doubleheader was the second in four days for the Pirates, who split a twinbill in Detroit on Wednesday.

The announced first game attendance of 9,267 was Cincinnati's second-smallest of the season at home, just ahead of the 9,192 on hand for an 8-5 loss to San Diego on April 27.

OF Aristides Aquino, designated for assignment by the Reds on April 30, cleared waivers and was outrighted to Triple-A Louisville. . The Reds added RHP Jared Solomon as their 27th player Saturday's doubleheader. The Pirates added RHP Max Kranick.

Pirates: To make room for Michael Perez on the 40-man roster, left-handed pitcher Sam Howard was designated for assignment.

Reds: LHP Nick Lodolo, who was expected to come off the 10-day injured lost to start the first game of Saturday's doubleheader, was scratched with the return of soreness in his lower back.

Pirates: RHP Zach Thompson (1-3, 9.39), who has lost each of his last three starts, was Pittsburgh's scheduled starter for Sunday's series finale.

Reds: RHP Tyler Mahle (1-4, 7.01) is due to try breaking his three-start losing streak on Sunday.