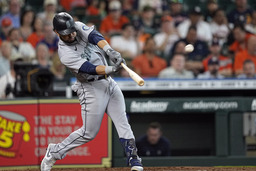 HOUSTON (AP) Sure, it's early. But Justin Verlander's work this season in his return from Tommy John surgery is an encouraging sign that the two-time Cy Young Award winner can return to elite form after almost two years away from the game.

Verlander turned in another solid start and Alex Bregman had three hits and three RBIs and the Houston Astros completed a three-game sweep of the Seattle Mariners with a 7-2 win Wednesday.

Verlander allowed five hits and two runs in 6 2/3 innings for the win. He is 3-1 with a 1.93 ERA in five starts this season in his return after pitching just one game in the previous two seasons.

"It's just one start at a time," Verlander said. "This game will bring you down in a hurry so you can't be complacent. But I would say it's better to get off to a good start than a bad one, but I've just got to keep working."

Michael Brantley added two RBIs as the Astros continued to roll with their first sweep this season, a day after helping Dusty Baker become the 12th manager in major league history and the first Black man to reach 2,000 wins.

Houston star Jose Altuve fouled a ball off his groin area on an at-bat in the fourth inning and stayed in the game to single, but was replaced at second base to start the fifth. The team said he left the game with right groin soreness.

Baker said Altuve was still being evaluated after the game.

Eugenio Suarez hit a two-run homer with one out in the seventh to snap a scoreless drought of 24 1/3 innings for the Mariners after they were shut out in the first two games of this series. They couldn't get much else going at the plate Wednesday as they lost for the seventh time in eight games.

"We got beat," Mariners manager Scott Servais said. "Not a good series for us. No way to sugarcoat it. It's just where we're at. We've got a good team, but we're not playing particularly great right now. Rough road trip."

The Astros got to rookie starter Matt Brash (1-3) early and led 4-0 after two innings. The Astros tagged Brash for six hits and four runs with four walks in three innings.

The Mariners hit consecutive singles with two outs in the fourth, but Verlander struck out Suarez to end the threat. Verlander sailed through the next two innings, retiring six straight before J.P. Crawford singled to start the seventh.

He struck out Jesse Winker before Suarez sent a slider into left-center for his fourth homer this season to cut the lead to 7-2. Verlander retired Abraham Toro before being replaced by Ryne Stanek.

"He did pretty good," Baker said. "He didn't have the velocity that he normally has, but he had a real good breaking ball. He had excellent location. So we'll just see how he responds."

The Astros led 1-0 after a two-out RBI double by Yuli Gurriel in the first inning.

Aledmys Diaz got things going for the Astros with a single in the second inning. Brash then issued consecutive one-out walks to Chas McCormick and Altuve to load the bases.

Brantley then lined a single into center field to score two and push the lead to 3-0. Bregman followed with a single to send another run home and make it 4-0.

Wyatt Mills replaced Brash to start the fourth and he was greeted with a single by Altuve. Brantley then doubled before Altuve scored on a sacrifice fly by Bregman.

Bregman had a run-scoring double in the sixth and Yordan Alvarez had an RBI single to push the lead to 7-0.

Astros: The Astros are deciding the next step for closer Ryan Pressly (right knee inflammation) after he threw six pitches in a perfect inning for Triple-A Sugar Land Tuesday night in his first rehabilitation game.

Mariners: RHP Sergio Romo (shoulder inflammation) threw a bullpen session Tuesday and will throw live batting practice in the next couple of days.

His son Darren couldn't be in Houston for the moment because he was on the field for Class A Wilmington Tuesday night, but the two talked afterward. Darren had a big night, too, hitting a walk-off sacrifice fly in the 10th to lift his team to a 3-2 win.

Before Wednesday's game, Houston mayor Sylvester Turner presented Baker with a proclamation marking Wednesday as "Dusty Baker Day" in the city. A video was also played on the stadium's big screen with numerous people, including fellow members of the 2,000-win club Tony La Russa, Joe Torre and Bruce Bochy. Barry Bonds, who played for him in San Francisco, and Phillies right fielder Bryce Harper, who played for him in Washington, also congratulated Baker.