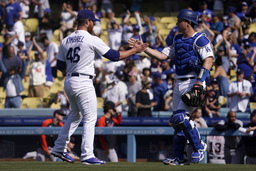 Cabrera hit a two-run homer off reliever Phil Bickford in the eighth inning to help the Tigers avoid the shutout. Cabrera, who got his 3,000th career hit last week, tied George Brett for 18th in major league history with 1,119 extra-base hits.

Freddie Freeman had a pair of hits and drove in one run, and Mookie Betts scored two runs to help the Dodgers win the series.

Buehler (3-1), who threw his first career shutout in his last outing, needed 23 pitches to get through the first inning. He pitched with a lot of traffic on the bases, but always got out of jams. He scattered six hits and struck out five and walked one.

"Nice to kind of escape one, if you will, but you still want to be better," Buehler said.

He faced 15 batters through the first three innings, six over the minimum, but retired the side in the fourth and fifth innings.

"He grinded," Freeman said of Buehler. "As much as we want him to throw nine innings and shutout baseball every time, it's just not going to happen. He gave us five strong innings. He didn't have his command and his stuff but that's what good pitchers do."

Dodgers pitchers combined to strike out 13 batters. Alex Vesia fanned the side in the seventh, and Bickford did the same in the eighth despite giving up Cabrera's homer.

"We had our opportunities," Tigers manager A.J. Hinch said. "Elite teams play defense and that's what that team does."

Craig Kimbrel earned his fourth save of the year when he entered with a runner on second and one out in the ninth. He got Eric Haase to ground out, but walked Javier Baez to send the tying run to the plate. Austin Meadows popped up to third base to end it.

"We're winning more than we're losing, but we just haven't hit our stride," Dodgers manager Dave Roberts said. "We have a really good team coming in Tuesday (the San Francisco Giants). The last week, I don't think we've played really good baseball, to be honest. We've pitched well, which is important. I know our best baseball is ahead of us."

Jeimer Candelario hit a solo home run off Justin Bruihl in the ninth for the Tigers, who trailed 6-0 through seven innings and have lost seven of their last eight games.

Tommy Kahnle pitched in a major league game for the first time since July 26, 2020, when he was with the Yankees. The 32-year-old reliever had Tommy John surgery in 2020 and a lengthy rehabilitation but finally made his Dodgers debut. He pitched a scoreless sixth inning, striking out two.

"I was very excited. It was a pretty special day. It's been a while," Kahnle said. "I treated it like any normal day I have in the past six, seven years I've been up here. It was fun to get back out there and be part of the team."

SAVE OF THE DAY

Kimbrel is one save shy of tying Joe Nathan for the eighth-most saves in major league history. Kimbrel has 376 career saves.

Tigers: Robbie Grossman was hit by a pitch from Buehler in the second inning and left with a bruised right hand. Trainers came out to look at him, and he stayed in to run the bases but then came out of the game.

Dodgers: LHP Garrett Cleavinger was optioned after Kahnle was activated.

Tigers: RHP Michael Pineda (1-1, 3.60 ERA) makes his third start of the season in Pittsburgh on Tuesday. After a season-opening start in which he pitched five scoreless innings against the Yankees, Pineda allowed four earned runs (on three home runs) at Minnesota in a 5-0 loss.

Dodgers: LHP Julio Urias (1-1, 2.50 ERA) faces the San Francisco Giants on Tuesday. Urias has allowed one or fewer runs in three of his four starts. He has struck out 15, but also walked eight.